Head in the game: Coping with competition anxiety

Athletes struggle with the pressure that comes with expectations 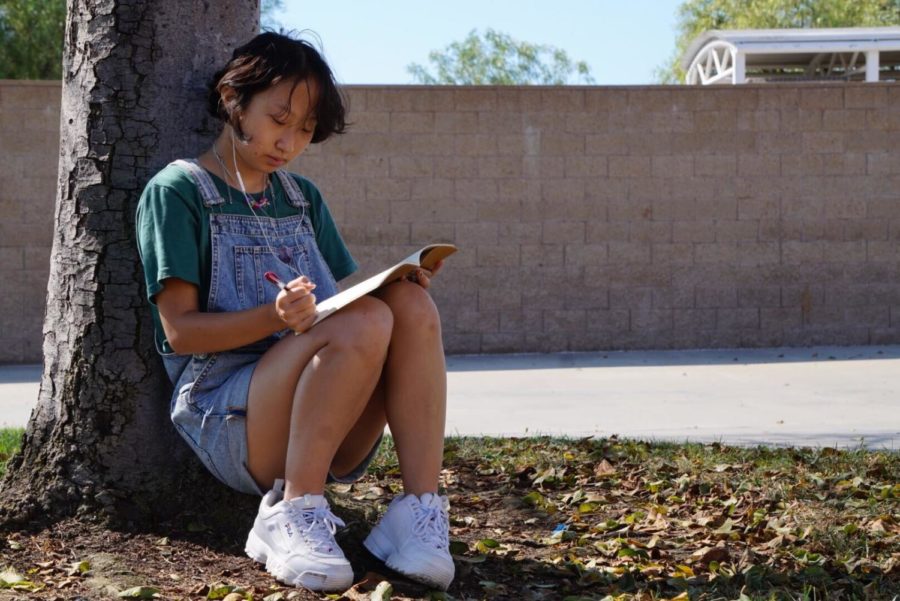 Grace He (11) listens to music while journaling her thoughts to de-stress. As a competitive figure skater, He grapples with the ex-ternal pressures of her sport

Ekene Okolo’s (12) stomach used to churn at the sight of the track and her body would begin to tense up. On the worst days she would tear up as the meet coordinators called her to the starting blocks. The only thing on her mind at those moments was disappointing those around her. She knew that her mind spent more time racing than she did herself, but she couldn’t stop. As soon as she saw that track, her mind had already dictated the outcome of the race.

As students begin to reach higher levels of sports, the gravity of each competition begins to weigh more heavily on them. The goals of collegiate level playing leads students to hyperfixate on the ways their performance may impact the rest of their lives.

As a track and volleyball athlete, Okolo said this stress comes from the pressure she feels to meet other people’s expectations.

“I am a perfectionist, and I don’t like being subpar or poor at anything I participate in,” Okolo said. “Just having that mindset, knowing I want to be the best, was really detrimental to my performance overall in track. And I also feel like the stereotypes of what a black person is supposed to be athletically impacted others’ perceptions of me. I’d hear, ‘oh, you’re tall and you’re black; you should be fast.’”

Even from a young age, Okolo said these external pressures began to rise and shape how she saw herself. If people saw that she should be able to achieve something, she felt she had to live up to their standards.

The expectation of what she should be able to achieve began to affect her performance, . In order to cope with the pressure, she began to stop pushing herself to the limit during track meets in order to say she simply didn’t care about her placings.

“When people would ask me why I did so poorly, I’d be like, ‘oh, I did that on purpose,’” she said. “If people thought I was actually trying and I still got second place, they’d be like, ‘oh, the tall black girl is not really all that we cracked her up to be.’”

Figure skater Grace He (11) also feels these external pressures as the intensity of skating culture ups the stakes of her competitions. Since figure skating had been an integral part of He’s life since an early age, it began to shape her identity throughout elementary and middle school.

“Pretty much everybody knew that I was the one who ice skates,” He said. “This led to my personal well-being having a strong connection to how well I was doing in the sport.”

Additionally, the pressure from parents and coaches made competitions very stressful for He.

“I think coaches kind of care about what’s going on in our heads, but not so much from a mental health perspective and more from a performance perspective,” He said. “There’s not that much of a ‘why do you feel uncomfortable doing this’ mentality. It’s much more of a ‘just do it’ mentality in the coaches.”

The culture of skating, combined with how one can be scored, can also affect a performer’s stress levels.

“Although in skating, there is a point system, that’s not the final say in performance,”  He said. “It’s also an art and there’s no logical way to judge art. In that sense it’s a never-ending cycle of ‘I always need to be better.’”

Individual sports athletes aren’t the only ones who can suffer from sports-related anxiety. Soccer goalie Jaden Nisperos (10) says the pressure of the game weighs on him as he is in goal.

“There are so many things going through your head as you play goalie,” Nisperos said. “‘Am I leading my team? Am I doing the things that I have to do correctly and setting up the offense for goal opportunities?’ The weight of the game really rests on your shoulders.”

These ideas of giving the game his all were instilled in Nisperos in his youth.

“I was introduced to a very competitive environment at a young age,” he said. “You could never go halfway. But soon it turned from a driven to a perfectionist mindset.”

This perfectionism led to aggravation and stress as he went through stints in his training where he felt his level of play stagnate. Frustration and anxiety built as he felt his reputation as a dependable goalkeeper begin to slip away.

“Within that internal battle, it was extremely difficult because no one really understood what I was going through,” Nisperos said.

Despite their struggles, each of these athletes is working to overcome the anxieties they face as they compete.

He used journaling and music to help calm her down when the stress began to be too much.

“Being able to just let out all my emotions in my journal really helped expel my negative feelings,” He said. “Music allowed me to focus on something positive and soothing, letting me calm down and return to a more tranquil place.”

According to Okolo, she had to change her mindset from one of external validation to one of self-satisfaction.

“I was really focusing on other people’s perception of me, and I really wanted to meet their expectations,” Okolo said. “But now, I’ve started to view sports in a way that takes the focus off of others, and puts it on myself instead. This allows me not only to be able to perform to the best of my ability with less stress, but has made my track experience more fun as a result.”