Finding a Way Out of the Maze 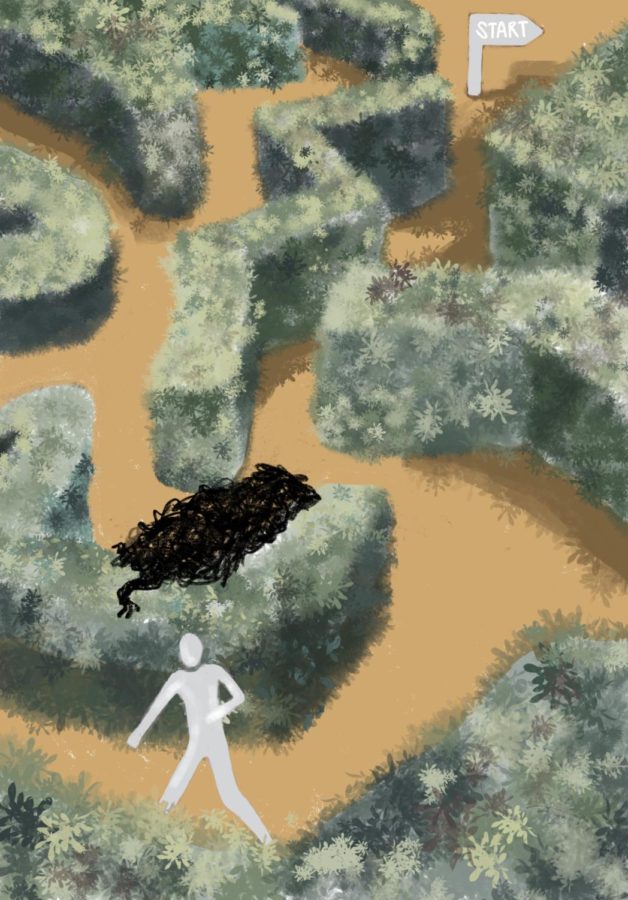 Munazil Abdullahi (10) walked out to lunch on the first day of school feeling frazzled. She searched desperately for one of her few friends, but felt overwhelmed with the large campus, crowds of people, and the unfamiliarity of high school.

“The first day of school was probably the worst ‘first days’ I’ve ever had,” Abdullahi said. “I was so terribly nervous on the first day, I remember being sure I was going to actually vomit.”

Despite her nerves, Abdullahi said that she looked forward to finally attending Westview in person and that she felt starved of those interactions coming out of last year’s virtual learning.

“I chose to stay home [last year] because I knew that everyone would just be joining Zoom from their computers while at school, and most of my friends weren’t going in-person,” Abdullahi said.

Like Abdullahi, many students spent last year attending online school from the comfort of their bedroom due to the pandemic. Because of this, some students struggled to concentrate and form connections, and now—even as sophomores—are feeling academically and socially lost.

For 350 sophomores, Aug. 18 was their first day ever attending school on Westview’s campus. This year is unique because both freshman and sophomores are new to the ‘real’ high school experience. But, in addition to the stress of being in an unfamiliar place, many sophomores have the demanding schedules of second-year students, filled with AP and Honors classes.

In a similar situation to Abdullahi, Amelia Kane (10) also spent the majority of last year doing online school. She missed out on the many benefits of in-person learning and is now struggling to adjust.

Kane said that specifically, she is struggling with Spanish class because she wasn’t required to participate as much during the online platform. Now, she needs to talk to her teacher in Spanish each day and is out of practice. Plus, while in-person, there are so many people that can cause distractions, whereas at home, everything was expected.

Now, students are in a new environment that is unfamiliar and there are lots of components that need to be juggled.

“I think the reason the beginning of this school year has been especially hard is because the last time I had to balance my school work, family life, extracurriculars, social life, and mental health, I was in middle school where the work was a lot less demanding and the expectations weren’t so high,” Kane said.

Because school was paused for sophomores when they were in middle school, it feels like instead of hitting play, life fast-forwarded. Without an in-person freshman year, sophomores are now tasked with making new friends, joining clubs, and finding where they belong at Westview, all while managing 4×4 schedules filled with difficult classes.

Emerging from the Screen

Colleen Kennedy is a psychologist and developer of the program “Got Stress?” which works to help high school and college students transition into adulthood and learn how to manage stress and anxiety. She said that many aspects of the pandemic such as adjusting to being in crowds and worrying about one’s health, will lead students to feel overwhelmed.

“Many high school students feel overwhelmed on a good day, so add in a pandemic and there are many more things that can lead to feeling overwhelmed,” Kennedy said.

Despite the challenges of online learning, more introverted students found that being at home allowed them to focus on their classes, instead of being distracted by the pressure of needing to have social interactions.

“I do consider myself to be more introverted, generally, so there were times that virtual classes were easier as I wasn’t forced to socialize as much as I have to when I go into a physical classroom,” Abdullahi said.

James Proscal, math teacher and sophomore class advisor, spoke about how collaboration between students is vital for the success of not necessarily the individual, but of the entire class. He mentioned that during online learning, there was a disconnect between classmates.

“Students are so good at bouncing ideas off one another. I’m not sure that you guys got that in the distance learning format. I think that’s really hard because you rely on one another so much.

According to Kennedy, social skills were not the only skills lost on students during the pandemic. Students have also developed short attention spans making it difficult to focus during their periods.

“If you think about it, when you were attending school virtually, were you paying as much attention as if you were sitting in front of your teacher at school?” Kennedy said. “We are out of practice in terms of being seen and being an active participant in the classroom.”

Though the virtual learning platform did hinder some students’ ability to focus and participate in class, it also helped others feel more comfortable and reduced students’ insecurities about the way they looked.

“After spending each day watching myself and judging whether or not I looked good enough for other people to see, it became a habit of self-criticism and anxiety around my appearance,” Kane said. “One of the things that was really hard for me was the thought that when we are here at school in person I don’t have control over how other people perceive me.”

Lost in a Labyrinth

Prior to last month, the majority of sophomores had never physically stepped foot onto the Westview campus before. This was evident on the first day of school, as students could be spotted all over campus holding onto their schedules with sweaty hands, trying frantically to find their classes.

“On the first day of school, I marked up a map just to locate where to go, and even with that, it took a solid week to find the quickest and most effective way,” Abdullahi said. “It’s way harder than I thought it would be. Considering the massive size of the campus, I think it’s pretty agreeable we’re all literally navigating a maze most of the time.”

There are so many stressors introduced by taking in-person classes on a large campus and needing to deal with these adds an extra layer of pressure which can be the tipping point for some students.

“The hardest class I’m taking is honors humanities and it’s especially hard because I’m not used to needing to write quickly in class on paper,” Kane said. “And also, there’s so much going on that it’s difficult to take such a hard class.”

Taking difficult classes is not only challenging because students must find balance between academics and extracurricular activities, but also many students feel that they missed out on learning last year because of virtual classes.

While doing online school, some teachers gave easier, and fewer, tests and assignments. Students found themselves doing open-note, open-Google exams, and even when they weren’t open-note, it was difficult to resist Googling an answer quickly in a separate tab.

“It was so tempting to just get on your phone during math class online because no one could see you,” Adullahi said. “That habit linked together with me not being able to learn online efficiently and effectively anyway, so it was difficult to retain what was taught.”

Now, sophomores are jumping right back into new material despite not fully understanding what was taught last year, requiring sophomores to play catch-up as they adjust to a new school setting.

“I was used to having weekly quizzes before online, but when we went virtual, I only had weekly quizzes in math and only two of my classes did midterms and finals,” Abdullahi said. “Now, it feels like I’m always in a loop, studying for the next test, final, midterm or any major assignment.”

Plus, students typically use freshman year for experimentation in what studying and learning tactics work best for them. Having a more relaxed freshman year didn’t cause much of a necessity for this, resulting in sophomores needing to catch up quickly this year.

“Having that transitional year online without a whole lot going on and having more time to focus on school, I never really learned the time-management techniques and ways to have balance that are needed to be a successful student,” Kane said.

According to Kane, freshman year is a vital time for students to learn what works best for them in terms of studying and learning. Without this, already challenging classes will become even more difficult for sophomores as they missed out on this transitional freshman year.

Abdullahi said that one of the biggest losses with the virtual learning environment last year was the lack of socialization. Coming into high school as sophomores, making connections will be more challenging than ever.

“In middle school, I most definitely wasn’t the most open person around, and in ninth grade I was planning on branching out,” Abdullahi said. “Obviously, that didn’t work out, so when I went into sophomore year, I basically had the social skills of an eighth-grader.”

“There’s far more people here and I find that I have so many people that I’m “acquaintances” with rather than being actual friends, which is so different from middle school where I always stuck to a few people and rarely left that circle,” Abdullahi said.

Although Westview offers a seemingly endless assortment of clubs and sports, due to the lack of social interactions last year, sophomores may still find it difficult to make connections.

“Meeting new people and socially connecting with others came more naturally pre-COVID-19 because we practiced every day,” Dr. Kennedy said. “But, just like learning to ride a bike, or learning to drive a car, the more you do it, the easier and more comfortable it becomes.”

Getting accustomed to daily interactions on campus challenges many students, especially when anxiety comes into play.

Abdullahi said she believes that the most anxiety-provoking part of school is taking tests.

“I don’t think my test anxiety was ever this bad,” she said. “When I sat down for my first test and my hand started shaking, I was just staring at it like ‘Seriously? You’re doing this right now?’”

Test anxiety and social anxiety are becoming more common as students transition into school this year. According to a study done by the National Institutes of Health, 1 out of 3 students aged 13 – 18 struggle with anxiety.

“We can think of our bodies like we do our phones, in that we only have so much ‘battery power’, or energy, and when we use up all of our energy, our bodies shut down and it is almost impossible to get things done, and get them done well,” Kennedy said.

“Although being in class and socializing may not have been a big drain on your body’s batteries in the past, as we emerge from the pandemic, being social can drain your batteries faster than ever before, and you may find yourself feeling really exhausted.” Kennedy said.

Students’ social batteries used to be accustomed to a full day of school and a busy afternoon of homework and extracurriculars. A year and a half later, students need to complete all of this, but while running on only 2% battery power.

“Now that I am a sophomore and everything is a little bit harder, I feel overwhelmed and unprepared, needing to quickly adapt to this new environment,” Kane said.

Kennedy mentioned that adjusting to a new school as a sophomore presents many challenges, but there are countless ways to overcome this. She suggests thinking of three positive thoughts for every one negative thought that you have, maintaining a positive outlook on the situation. Or, some students may find it helpful to set realistic goals and develop a consistent daily routine.

“Will this year be harder than others? Probably. But hard doesn’t necessarily mean bad. Hard just means that it may take more time and energy to get back to feeling ‘normal’,” Kennedy said. “The best thing you can do to help yourself through these hard days is to be brave and face these scary situations head on, and be kind to yourself when things feel difficult.”