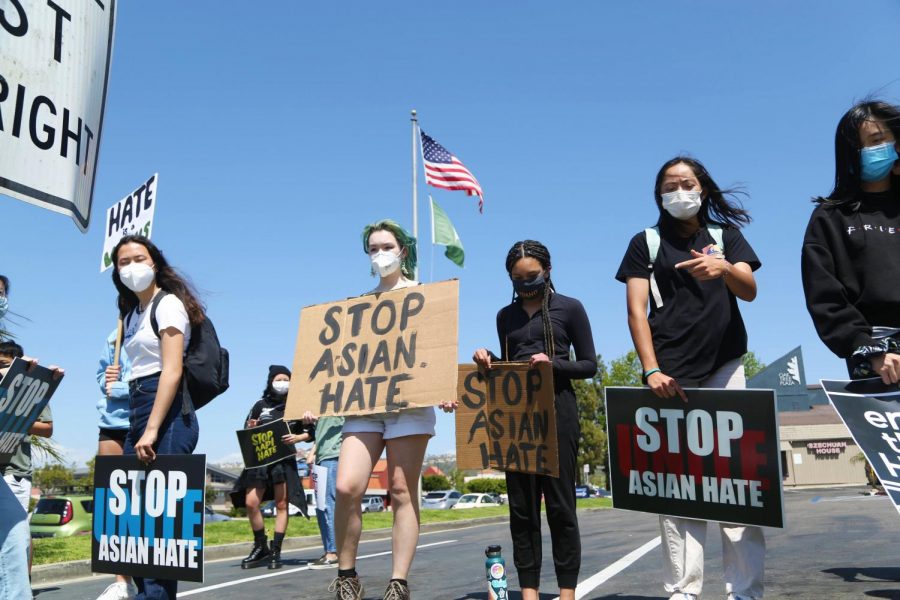 Nearly two dozen students had gathered to stand up against Asian American and Pacific Islander (AAPI) hate at the Oak Tree Plaza intersection on April 17. The sidewalk was peppered with brightly colored slogans, since before the event, every attendee had been given a sign to hold.

Swasti Singhai (10), who attended the protest, said that her primary goal was to show the AAPI community that there were people who would stand for them. As a member of Awareness for Change (AFC), the club that organized the protest, Singhai went with friends who were also a part of the group.

“It was really nice when we would wave at people in cars, and they would smile and wave back,” Singhai said. “Especially when it was older Asian Americans, because often they’re the ones most at risk, and what I really wanted to do was show solidarity.”

Alongside friends and club members, students like Singhai stood on either side of a crosswalk for more than an hour in the afternoon, waving signs and talking to passersby.

According to club president Aiken Wang (10), the protest was meant to attract attention to Asian American causes, most specifically, awareness of recent anti-Asian racism.

“Obviously, we’re a very local organization,” Wang said. “But even at a local level, awareness is honestly one of the best things you can do. You can’t just look at a protest and say ‘oh I’ve changed the minds of x many people’ but when it really comes down to it, the impact of having a voice in the community makes a difference when it comes to voting.”

Since its founding, this year, AFC has been in partnership with Amnesty International, a human rights advocacy organization. The club has made sure to host projects relevant to currentissues, such as an initiative for writing letters to political prisoners, but the protest was the first in-person AFC-organized event this year.

Wang, who had organized a Run for Change earlier in the morning, where he presented a history of AAPI-oppression in the U.S. for the runners and local news coverage, also helped to organize the AFC protest later in the afternoon at the Miramar intersection.

Wang’s experience with putting together other events was useful after recent incidents of racially motivated violence against Asian Americans and the overall 150% increase in anti-Asian hate crimes pushed him to reconsider his position as a member of the community. As club president, Wang said he wanted to help his classmates find a productive outlet for feelings of fear and frustration.

“It’s just been a time of such unease and unrest, so we wanted to find a way to fight through that,” Wang said. “Our goal was to find a safe, positive way of supporting the community.”

Wang has been a passionate activist, and this experience influenced the decisions he made when he was planning the event along with the rest of the executive board.

“Throughout time we can see that if we cannot find the courage to stand up against [racism], no one else is going to,” Wang said. “We need to fight to have a voice for ourselves within our community, now more than ever.

As a part of this effort, the protest had been advertised extensively on Instagram, primarily in the form of post graphics that asked interested students to sign up. Social media presence has been a large part of drumming up interest in events, as Wang has found over the summer, especially because of the lack of in-person contact.

Likewise, the isolation that has come with social distancing was part of what motivated Singhai’s attendance.

“With COVID-19 and all, people are more isolated than ever,” Singhai said. “So to be able to go to support [the minorities at risk] in way, by showing up at the intersection as they drove by, was a way to show our care without the same health risks.”

Overall, nearly three dozen people signed up to attend through the club’s Google Form, but only two-thirds showed up. Wang said he hopes to help alleviate concerns in future events by making safety a priority.

“We obviously had to factor in COVID,” Wang said. “But we’ve tried our best to alleviate those risks by mandating face masks within our groups and splitting up the overall crowd into two separate clusters for less person-to-person exposure.”

The experience that came with AFC’s first try will go into helping improve future events.

“We hope students will stay on the lookout,” Wang said. “Whether or not they went to the first one, as we get closer to summer and more people get vaccinated, I’m hopeful that we’ll be able to organize another rally in the future.”