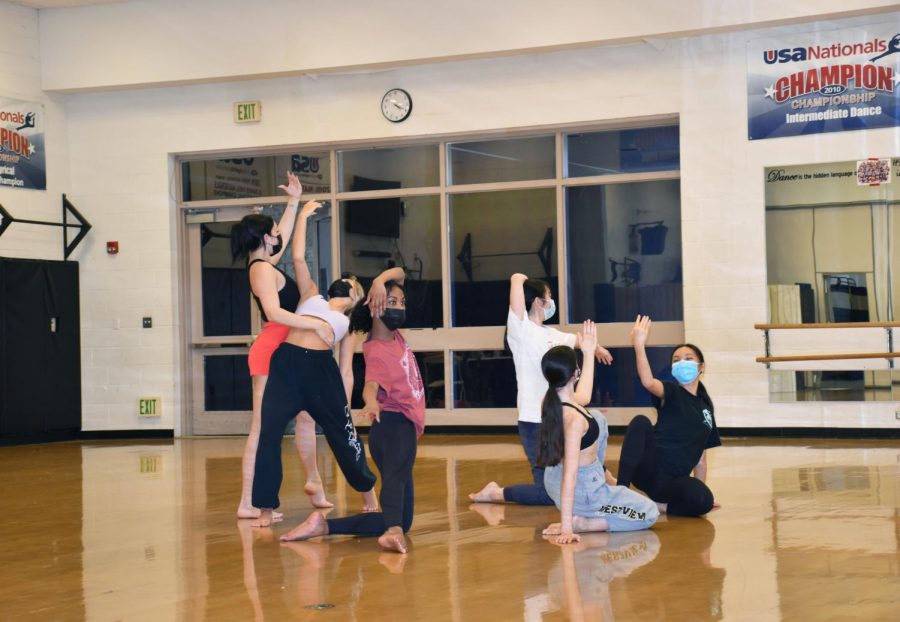 Dance Troupe members practice in the gym in preparation for a Spring Show. Photo by Alice Chen.

Dance Troupe Officer Alexis Weldner (12) sat at her desk, her eyes fixated on her computer monitor. Displayed on the screen was a Zoom award ceremony for the West Coast Elite (WCE) Dance Competition she had virtually competed in with Westview Dance Troupe (WVDT). As WVDT’s first-place wins in small jazz and x-small contemporary were announced, Weldner’s phone buzzed with congratulatory messages from her team members. The moment she missed the most, Weldner said, was not being able to celebrate the victories with her team.

“Given our circumstances this year, I think we all did a lot better than we anticipated,” Weldner said. “With the difficulty of dancing in masks and finding practice spaces for the whole team, we were definitely able to become closer as a team.”

Dance Troupe Officer Olivia Dawson (11) agreed that participating in the WCE competition allowed the team to bond, and said she believes that the competition also boosted team morale.

“[This year’s WVDT] is the biggest team we’ve ever had, and doing well at the WCE, a competition we’ve never really done well at, was really rewarding because it was a sense of normality, and it felt like everything  would be okay,” Dawson said.

Due to the larger troupe this year and the COVID-19 restrictions, Dawson and Weldner agree that the team has had few opportunities to bond outside of dance.

“For normal competitions we usually travel to LA, stay in hotel rooms with each other and we all get ready in the morning with each other, which is like a bonding experience,” Dawson said.

Dawson, who has been on the WVDT for three years, said that it was difficult to recreate the energy of an in-person dance competition virtually.

“What I really love about attending in-person dance competitions is that even if you are competing against another team they will still watch and support you, which is an aspect that I feel was lacking this year,” she said.

Weldner agreed that the overwhelming support she felt during in-person dance competitions was something she missed during this virtual season.

“The best way I can explain it is that it’s like you’re a football player and you have the Black Hole cheering you on,” Weldner said. “You feel so much energy, I think that’s the closest thing you can get when it comes to dancing.”

Dawson said that she has faced difficulty with filming competition tapes, not only because of the lack of motivation she feels, but also because the condensed sports season has created lots of schedule conflicts.

“This year we’ve had a lot less time and less practices because we are trying to juggle all the sports coming back at once,” Dawson said. “When we were filming for USA Nationals, we once had to wait until 10 p.m. because we had to wait for volleyball to finish [using the gym]. Though we’ve had less time, there is more urgency to do better.”

The abrupt ending to last year’s season, Dawson said, compelled her to make the most of her time with WVDT.

“Last year we didn’t get to go to nationals and we submitted an old video taken earlier in the year for the competition, so it felt like we didn’t really get an official closing to our season,” Dawson said. “I had an urgency to start a season and finish it feeling proud of what we had accomplished.”

Aside from taking part in virtual competitions, Weldner said that the WVDT officers have attempted to create more time for the team to interact.

“Since I am on the WVDT competition team, I see the competitive team members a lot, but I barely get to see [the non-competitive team members],” Weldner said. “We [WVDT officers] saw that as a problem, so we decided to hold weekly classes in addition to competition practices and tried to choreograph dances for everyone. Around Halloween, we choreographed and taught a dance to the whole team just to film it for our Instagram.”

Although the past year has been a different experience for Weldner, she said she was glad to have her team beside her.

“Having structure in dance now and being able to practice consistently is really nice, and I think it is the closest our coach could’ve given us to a normal year,” Weldner said. “I’m really appreciative, and I think it’s really worth it being on the team.”