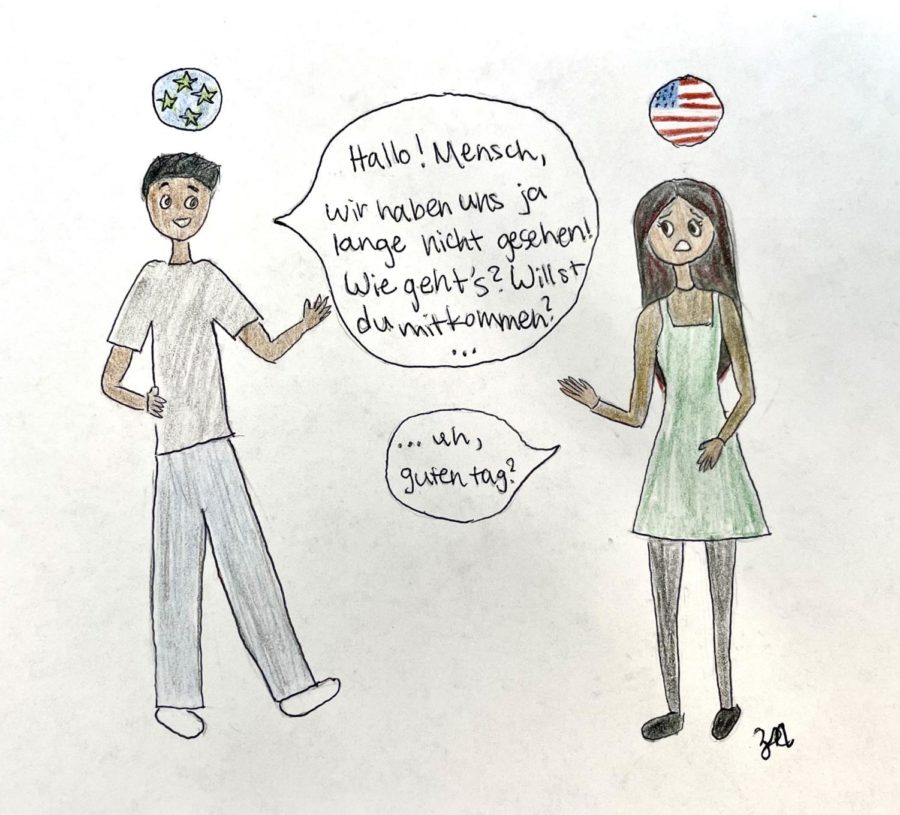 When I was in kindergarten I attended a dual-immersion elementary school that taught German incorporated into the curriculum. I would spend one week with a teacher that taught in English, and the following week I would switch classrooms and learn with a teacher that taught in German. At the age of five I was singing songs and making conversation in German. According to scientists, the recommended age to start learning a foreign language is before the age of 10. Although it is not impossible to learn a second language later inlife, it is significantly harder for the human brain to become fluent. As you get older, your brain develops and there is a higher difficulty in changing the neuroplasticity. This is the aspect of your mind that assists in creating a habit of acquiring a new language.  This is why it would be extremely beneficial if schools implemented learning a second language at an earlier age than high school.
In San Diego, we do have elementary schools that have language immersion education curriculum such as Valley Elementary,  which incorporates Spanish into schooling as early as preschool. There’s also Albert Einstein Academy, which was where I attended elementary school. There, I almost became fluent in German. I remember I used to get home and show off my German skills to my family by telling them about my day in German. Then, as I switched to a public middle school, I lost most of my communication skills because I didn’t continue working on my German. I still know some of the basics, but I know multiple people from elementary school who kept going with German and still know how to speak the language fluently today.
My regret in losing this skill became more prevalent this summer when I went on a trip to Europe and I visited many cities where the main language spoken was German. I was able to recognize many words but unable to have a conversation. While in Europe, I then met a family friend who was around my age who knew how to speak German, English, and French because he had learned them in school. This was extremely baffling to me because I had never met anyone who had such a vast knowledge in languages. This influenced me to then look into the language curriculum implemented in Europe.  I discovered that by the time students are at the end of elementary school, a vast majority of them have already learned two languages. I did some more research upon coming back to the States, and learned that 31 countries in Europe require kids by the age of nine to know two languages, which makes sense given the fact that there are multiple different countries with different languages bordering each other. Even though the US may not border as many countries,  more than 300 languages are spoken across the nation. So why don’t we incorporate learning a second language in our schools?
Even at Westview, a foreign language isn’t a requirement, which is the same statewide, but in order to be admitted to UC/CSU schools, students are required to have participated in a two-year study of a second language requirement in order to enroll. When I first started learning Spanish my freshman year of high school, I regretted that I didn’t start learning Spanish at an earlier age.
At Mesa Verde, there was an opportunity to do so, but it was an elective and not a requirement. In the Spanish classes at Westview students get to explore the benefits in being bilingual. Now I am in AP Spanish and it is my favorite class because we are able to get more exposure to another culture and learn how their lives are different from ours.
Too often adults say, “I don’t speak [language], I just took a class in high school and forgot all of it.” It can take up to five years to master a foreign language, but without regularity, it can take just three years to forget how to speak it. Every year we are required to take English classes, where there’s repetition to learn to format essays and have debates so that these skills stick with us for the future. If we had the same required continuous pattern for foreign language classes it would be less likely for people to forget it. Instead students are required to take two years of sciences, which does nothing for the people who have no interest in doing anything regarding science in their future. When students leave high school they are going to have more experiences interacting with many different people who are likely to speak other languages. In contrast to the amount of times they are going to need to use information on how a nucleus works.
Language is a significant aspect of connecting with people, and much of the conflict that goes on in the world is miscommunication through language barriers. One of the easiest ways to help move toward solving these problems would be having students learn languages at a younger age so that they stick and they are able to use the language when they are adults in society.