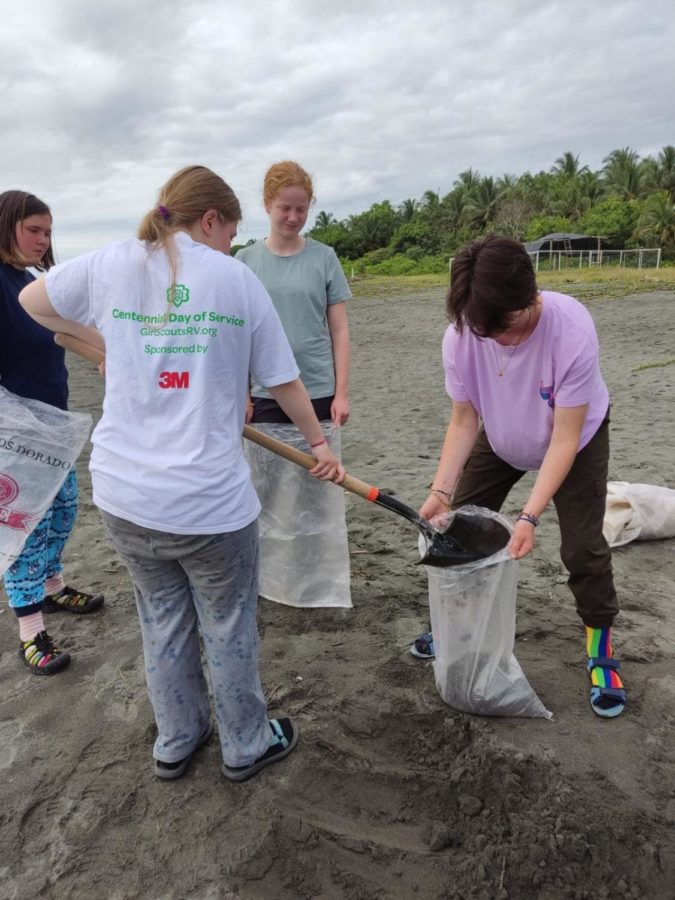 Zoey Lestyk (10) slowed to catch her breath in the pitch darkness. Determined and on the search for sea turtle nests, she quickened her pace to return to the rest of the patrol, as they combed through the coast in the wetlands of Panama. With no lights and natural obstacles in the way, Lestyk trudged on for almost 10 kilometers.

Lestyk had discovered the Outward Bound program through Girl Scouts, where she was given the opportunity to spend two weeks in Panama and Costa Rica to do service work for the people and environment in the Bocas del Toro archipelago.

The main purpose of the trip was to rescue sea turtles. Since all species of sea turtles are endangered or threatened, conservation effort is crucial to these animals’ survival. While in San San-Pond Sak in Panama, Lestyk safeguarded baby sea turtles.

“We helped with the hatcheries and we did nightwalks to scour the beach for mama turtles to make sure that we knew where their nest was,” Lestyk said. “[This was so] we could help the [baby] turtles go off to the ocean without any problems.”

During nightwalks, she said they were only allowed red lights to prevent harming the turtles.
“It was really disorienting because you could barely see in front of you and it was on sand as well,” Lestyk said.
With the patrol, she would find nests and dig them up to help the baby sea turtles reach the ocean faster. Often, baby turtles run out of energy when trying to get to the ocean from their nest in the sand and end up not making it.

“We also did a cleanup of the beach, like clearing big sticks so they could just have a straight path to the ocean,” she said.
Lestyk added that domesticated animals on the island also had trouble in their environment.

“They have a big dog problem there,” she said. “A lot of their dogs aren’t spayed or neutered so there are a lot of dogs in bad condition running around.”

Tracking animals was not the only purpose of visiting the islands in the archipelago, nor was it the only impactful experience for her. Lestyk recounts her time with the people on Solarte Island.
“We were living with this lower-income native community there,” Lestyk said. “The wealth disparity was really saddening to see. On the island there was trash everywhere, broken glass windows, and on the main island you would see AC’s, fans, TV’s, higher tech stuff.”

While living in that community, Lestyk also did service work for children there. In one circumstance, she had to help students on the island get resources to go to school.
“[The school] had a very strict dress code there and since they weren’t as affluent or rich, they didn’t have the money to buy the uniforms or what was needed,” Lestyk said. “On our day out to the shop we bought what they needed, like a belt or a skirt that went down to a certain length, or pants.”

Lestyk said the service work with the children was a highlight of the trip.

“I think my favorite part was helping with the children,” she said. “It was like I could make a positive difference.”.

At the Outward Bound base on the island, Lestyk was in a group with 27 other girls, including another Westview student, Aspen Cotton (10), along with trip advisors and instructors.
“We were always kept busy, this was expressed by the instructor’s constant reminder [to] ‘live in the moment’ and also the fact that they didn’t allow watches,” Lestyk said. “They were very down-to-earth and it was very interesting to see where everyone was from.”

According to Lestyk, getting to know the native people of the island was very grounding.

“It was really nice to see how happy they were even if they had very little,” Lestyk said. “They were happy with what they had and they were just living their lives.”

Lestyk’s involvement in the program gave her a greater knowledge of her own life and others.

“It taught me so much, they had so little and they were so happy and I have so much and I have all this turmoil,” she said.

Lestyk said the trip had a fair share of challenges.

“Running on 4 hours of sleep, lugging my duffle bag of everything that I’d be using for the next 2 weeks across Costa Rica and Panama, getting eaten alive by chitras every hour,” Lestyk said.
Upon being in a new environment and putting effort into learning about nature, animals, and most of all, the people of Bocas del Toro, Lestyk acknowledges the difference it made to her life.
“[I’ve] found an appreciation for what I have,” Lestyk said. “It made me feel like a more positive person.”

After coming back from the trip, Lestyk said she experienced a feeling of triumph.

“Afterwards, I felt like a different person,” she said. “Each challenge we faced felt like a punch to the gut, but once it was all through, I seriously came out a stronger person.”