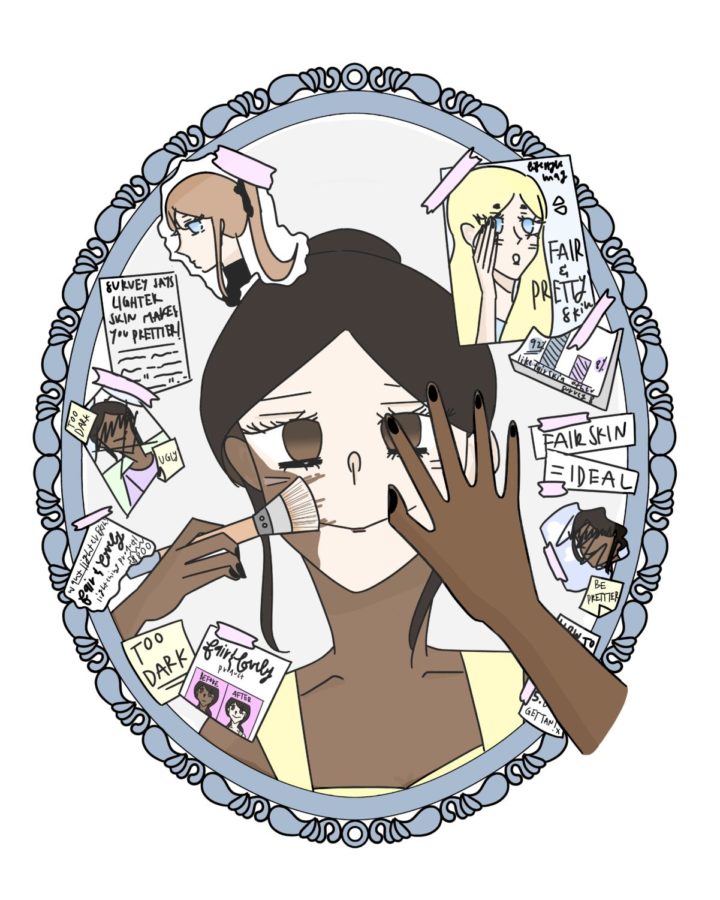 The first time I noticed it was in a flea market in India. Bustling crowds, shelves lined with colorful accessories and creams, product advertisements hanging on the walls—in the midst of the chaos, it lay inconspicuously. A bottle of Fair&Lovely, a product promising skin-lightening.

The name itself didn’t click until much later, but even on first sight the advertisement bothered me. A South Asian woman was depicted on the front, her face originally her natural, tan skin tone. Her expression was grim, as she was evidently unhappy with herself. She was copied over a few times on the advertisement, and with each iteration, her expression appeared a little brighter, her skin noticeably pale by the last image.

After heavy criticism, Hindustan Unilever, Fair&Lovely’s parent company, rebranded themselves as Glow&Lovely. Yet even with the rebranding, the ingredients remained the same. The cream’s main active ingredient, niacinamide, suppresses melanin. But the company insists that the product is, and has always been, not “a skin-bleaching product.”

Fair&Lovely is a true embodiment of colorism, the notion that “fair,” or light-skinned, is beautiful, but it is by no means an isolated incident. Rooted in racism and classism, colorism is prevalent globally, from South Korean K-pop idols edited to appear paler to the US media unproportionately favoring lighter-skinned people. Historically, paler skin was representative of Western beauty standards and also a symbol of wealth, as the upper classes were spared the burning sun that the labor class was subject to in field work.

The ideal of pale skin has been passed down from generation to generation, and products similar to Fair&Lovely are designed to profit off of these insecurities. And it hurts to see family and friends genuinely believe that their beauty is defined by their skin color. It hurts to see that insecurity projected onto others. From urging children to play inside to avoid getting tanned in the sun to scrutinizing images with poorer lighting in fear that their skin will appear a darker complexion to using skin-bleaching products, colorism is detrimental to one’s self-perception.

I’ve heard it myself countless times, and when I was around 12 years old, I internalized the idea that I needed to be lighter-skinned. I used filters, subjected myself to creams with false promises, and tried to stay out of the sun. I refused to admit that my mindset was inherently problematic, and I fell into the same trap so many people around me have.

Unlearning it has meant recognizing that my internalized colorism was the foundation for racism. While racism is the  discrimination of a marginalized race, often perpetuated by systemic injustices, colorism is within a minority group. It usually entails preferential treatment of lighter skin tones and can also cause systemic prejudice. It’s discrimination in the plainest sense, but within one race rather than between multiple.

A prime example of colorism is in Hollywood, when casting directors consistently choose lighter-skinned African Americans in roles meant to portray darker-skinned characters. In Netflix’s film The Harder They Fall, the main character is based on a real person, a dark-skinned African American woman, but a light-skinned woman was chosen for the role. It was similar for other characters in the movie, and despite backlash, nothing has really changed. Shows continue to cater to white beauty standards, affecting our own perception of color in media.

It’s hard to say when corporations will stop idealizing fair skin and when Hollywood will start representing all skin colors equally, but until then, we can start dismantling colorism on an individual level. We can recognize colorism in our daily lives, and start correcting family and friends on their subtle microaggressions.

So with this coming school year, I hope we can all bask in the sun, content with knowing that our beauty is not defined by the color of our skin.