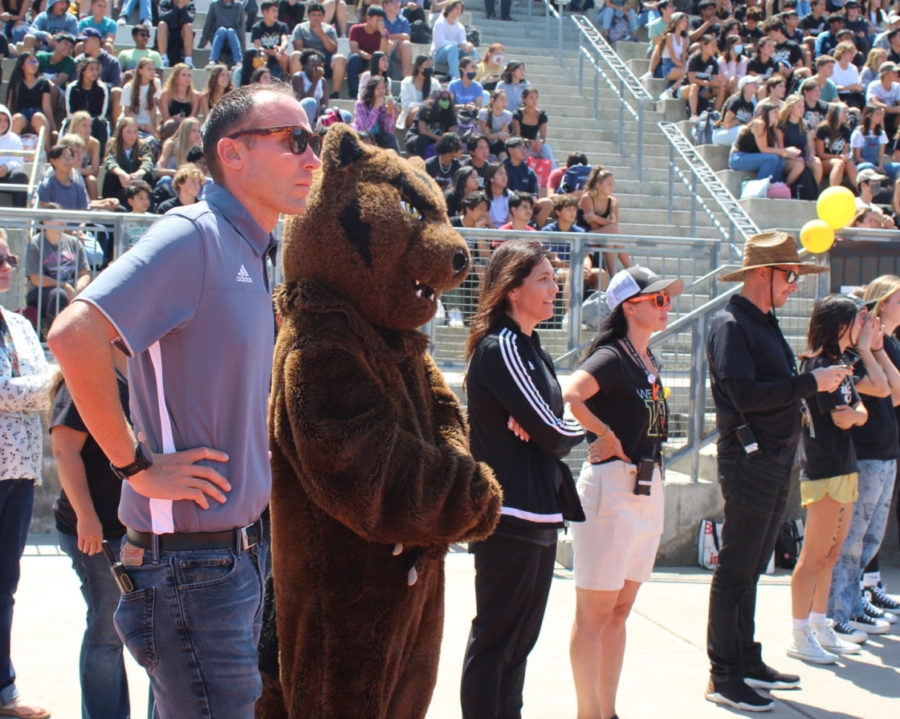 As Westview leaves its first 20 years behind, its next 20 years present promise. It creates the same opportunity for innovation as when Westview first opened.
This new beginning follows on the heels of a large change in staff. In addition to the retirement of former Principal Tina Ziegler, former Assistant Principal Darcel Glover is now the principal of Black Mountain Middle School. The year begins with 50 percent of the school administrators being new to Westview, including new Principal Ernie Remillard and Assistant Principal Craig Bowden.

Bowden began his career as an Olympic ski racing coach, where he said he eventually lost a sense of purpose. Upon coaching an athlete with autism, he was encouraged by a friend to work at a school for boys with autism, beginning his foray into education.

He was then propelled towards a career in education and earned his Education Specialist Instruction Credential. With his background in special education and a deeper understanding of equality and equity, Bowden began working for a charter school in downtown San Diego, called e3 Civic High, in 2016—which strives to “Engage, Educate, and Empower” its students. He said he was drawn to PUSD’s similar mission.

“I’ve been watching what Poway has been up to in terms of a focus on equity and inclusion,” Bowden said. “Those things are important to me, and I’m excited to be in a district where that’s a focus as well. Westview has a history of being an academically strong school, but I’m getting a sense that the culture here is one of inclusion as well.”

To more deeply understand the culture at Westview, Bowden said that he has grown accustomed to absorbing the institutional knowledge of those around him.

“I’m constantly listening,” Bowden said. “I’m essentially on a listening tour to make sure I hear all that intellectual capital and the knowledge of the culture that is shared like how things have been done, or why things are done, before moving forward. [I’m] making sure that we’re honoring where we’ve come from before looking ahead and saying ‘here’s where we want to go’.”
Fellow Assistant Principal Shannon Parker, who has served in a variety of roles as a teacher, coach, department chair, and ASB director for the school since almost as long as it’s been around, said that change inevitably introduces uncertainty and anxiety.

“You think, ‘How will things be different? How will things potentially be the same?’,” Parker said. “I don’t think I was alone in feeling [anxious]; I think a lot of our staff felt that. Tina Ziegler was our principal for five years, but before that, she was an assistant principal. Even when she came in as a principal, there was a sense of assuredness because she was familiar with our site; she was familiar with our systems and our culture. With someone who doesn’t know our culture or our school, there’s always that uncertainty of what could potentially change [or] what philosophies might this person bring in.”

Parker said that despite uncertainty, she believes that new leaders can bring positive and much-needed change.

“Personally, I really see it as an opportunity to get fresh eyes on our systems,” she said. “I think it’s important to be reflective and to look at how things are running and working. Sometimes, when you’re so embedded [into a system], it’s hard to [clearly] see. While I felt the uncertainty of 50% [of administration] being new, I also had this underlying hopeful feeling of ‘this is good for us.’ This is good: fresh eyes, fresh perspectives. And [that’s] really important to me [because] the fast track to stagnation is not taking a look at your institution or your system from different perspectives.”

However, uncertainty in other departments at Westview has created challenges. Following the retirement of former Lead Custodian Art Wolfe last year and former Finance Clerk Kristine Kirkman, the custodial staff and administrative office have had to adjust.

“I think everybody who has worked in education knows that your custodians are essential people to keeping our campus running on a day-to-day basis,” Parker said. “We want what’s best for our students and our students deserve the most clean and the most professional institution possible. So [Wolfe’s retirement] was not a small change for us. This is a very big change that I think our entire staff has to balance.”

“In that interim time, it’s been a little bumpy,” Parker said. “Our custodial staff is doing the best they can to fill in and support where needed without that position. We were lucky enough to have a fantastic supervisor who stepped in in the interim.”

Many staff members in the front office have also had to take on new roles. For instance, as the search for a new finance clerk continues, the administrative specialist to Remillard, Tara Appling, who has experience working in many areas of the front office, has stepped in as the finance clerk.

“[It’s] not ideal because everybody’s job description is already robust and lengthy, [and it’s] hard for any one person to take on the job duties of someone else,” Parker said. “Since COVID, there’s been a lot of staffing changes and so our entire front office has had to pitch-hit.”

Ultimately, Parker said that regardless of any small or large changes that occur on the administrative level, the well-being of all students at Westview will continue to guide administrators’ work.

“The focus will always be on what’s best for students,” Parker said. “That will not change and [it] did not change that our North Star will always be the student experience here at Westview. When [Remillard and Bowden] came in, [we began thinking,] ‘Okay, so Westview is 20 years old. What does Westview look like in the next 20 years?’ That was a really refreshing question to have to ask ourselves. We have been a great school for quite some time and while we should celebrate that, and we should recognize all the work we have done, what is our next step like? What does Westview look like in the future? That’s where the work is going to be next.”