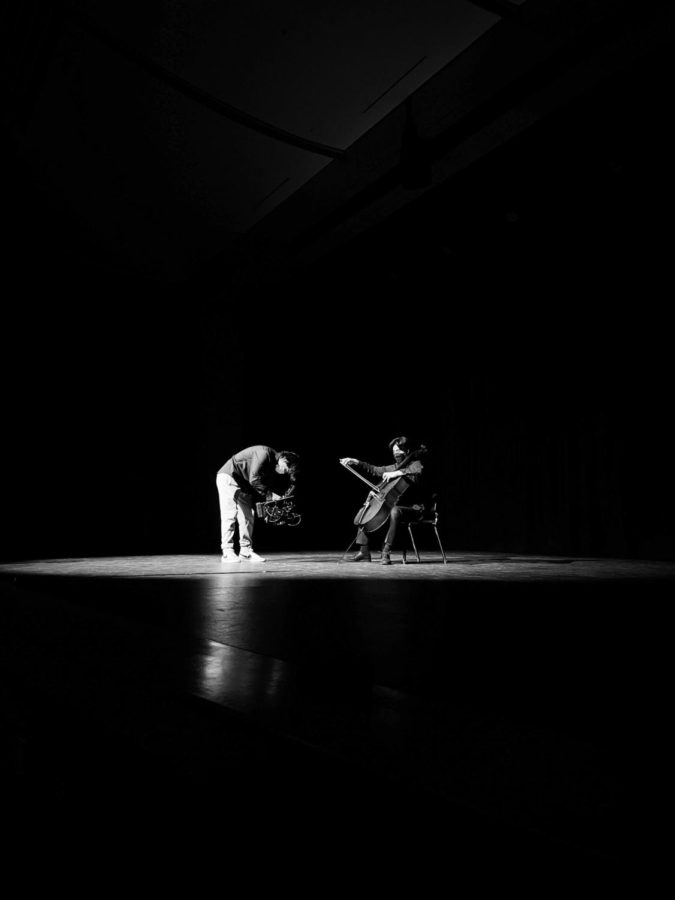 Justin Wu (12) performs his cello setlist for the Interntional Tchaikovsky competition. Over the summer he practiced upwards of five hours daily.

Justin Wu (12) held his breath. His cello rested in the canal between his peck and left shoulder, firmly held in place by his left thumb and index finger clasped around the back of the instrument’s neck. In his other hand was his bow, loosely gripped by a slight pressure from his middle and forefingers. Twenty or so sets of  eyes stared at the motionless Wu. Some were family, others professional musicians who had traveled from Temecula to watch him play. The studio they all sat in was small, slightly-but-not-too cramped.

Seventy-five minutes of repertoire. That’s what they all came here to see. Seventy-five minutes of Wu performing Franchomme, Chope, Paganini, Bach and other greats of the classical world. It was a set he had been practicing for 3 years and the set he was to perform at the Tchaikovsky Competition for Young Musicians later this year.

He had entered the competition prior to the COVID-19 pandemic but it continued to get pushed back and canceled until a definitive date was set for later this year.

Wu swept his bow over the large maplewood instrument, hovering it centimeters above the strings.

Then he began to play.

A somber tune lifted from the cello in a slow swaying 6/8 time. Franchomme’s Caprice No. 9 in B minor, a piece Wu had practiced hundreds of times.

In fact most pieces he practiced hundreds of times. If he wanted to place well in the competition, he had too. Most school days he would practice at least an hour and during the summer that number would increase to three to three and-a-half. Although this seems like a ton of practice Wu still remarks that it isn’t enough.

“I should practice more, especially with the competition and stuff coming up,” Wu said.

Wu regimented his practices in order to maximize his time: 15 minutes of scales and afterwards whatever time was needed in order to polish up each piece. He would never practice for more than 1-2 hours at a time, taking periodic brakes for his sanity’s sake.

“I usually like to warm up a bit with skills, maybe for like 10-15 minutes,” Wu said. I honestly should practice more scales. [After that] I usually practice in like, one and a half to two hour sessions and when I do practice a lot I  focus like on like one piece per practice session. I try to figure out a part to focus on and then  drill that part until it’s how good I want it to sound.”

As Wu finished the first movement of Caprice No. 9 he said he started to feel himself become less rigid in his playing and loosen up his grip on the cello

“I was nervous of course, but after playing for a little while, I felt more warmed up and became more confident,” he said.

Wu said as he continued to play he was able to adapt to the unusually small venue and use it to his advantage during the setlist.

“[The tight studio] made the experience more intimate because the audience was smaller and I was closer to them,” Wu said. “They could more easily pick up all the nuances and details I tried to add to my performance.”

Wu likes to add his own little flair to each piece he plays. Since there are so many different ways to interpret the performance of a piece, Wu is able to add his own signature touch without compromising the vision of the original composition.

“I play around with the dynamics and buildups to form different musical phrases,” Wu said. “I might play [a certain] part softer so I can crechendo up to a climactic point or I might try to bring multiple voices into certain pieces.

By the end, Wu said he felt fully immersed in the music he was playing. As he completed the final flourish Wu let out an audible sigh of relief. It was finally over.

“Ending the performance was half ‘I finally got that over with’ and half ‘oh my god I’m so not prepared for the competition,’” Wu said.

Wu still has a ways until the performance which means more practicing and more rehearsing.

“As the competition comes up I’m going to practice four to five hours a day,” Wu said. “It would be cool if I could get to the second or third, but that’s beyond my level. But [I guess] it is still possible.”