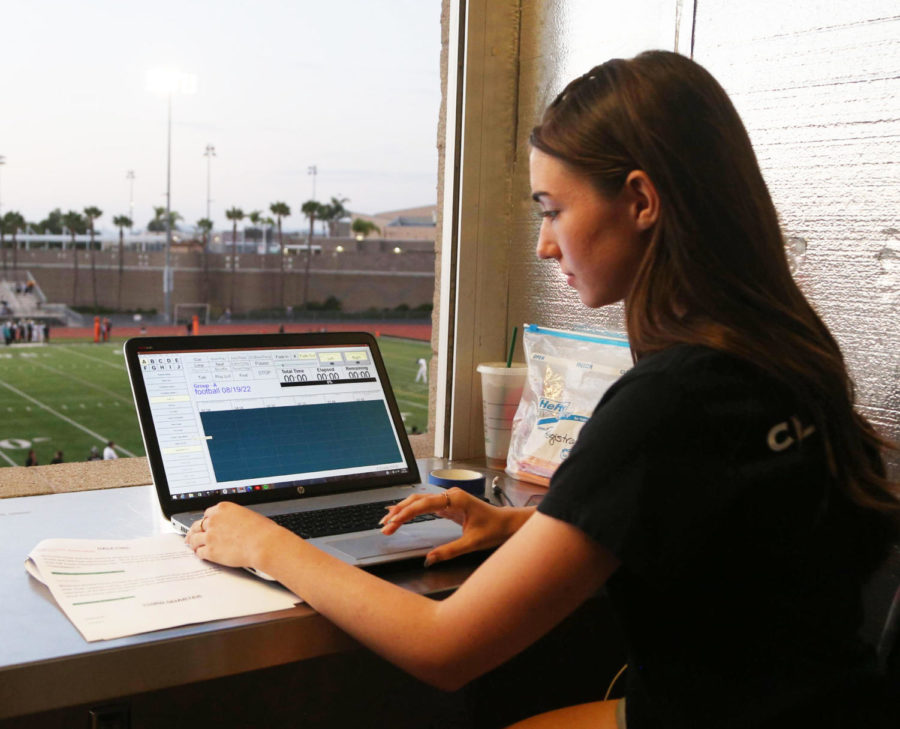 Abigail Daines (11) attended the first football game of the year last week, but even though she was fully engaged in the action, she was not sitting in the stands. She was not cheering in the Black Hole or playing out on the field. Instead, Daines played a role in the evening that often goes unnoticed. She was behind the scenes in the press box playing music for the crowd.

After a year and a half of working on the sound crew and serving as the sound crew head for the theater company, Abby was selected by Athletic Director Steve McLaughlin to run the sound board for the football games. She says that the skills she has picked up in the theater helped her tremendously during the game.

“If I didn’t have any knowledge about [sound that I learned in the theater], I wouldn’t know how to fix the aux cord, for example, because that was one of the problems we had, or volume, so it was pretty useful,” Daines said.

According to Daines, she prefers working behind the scenes and she is grateful to have this opportunity to watch the game from a different perspective while still contributing her talents to the school.

“I don’t really like being down in the Black Hole and screaming, so making my own music and not having to be center stage is really great,” she said.

Daines is joined in the press box by the announcer, the scoreboard operator, the clock operator, and assistant coaches who are calling plays to the head coach down on the sidelines.

Starting from the beginning of the game, McLaughlin said that a large part of Daines’ job is gauging the mood of the onlookers and using music to enhance this.

“She is there to provide an atmosphere for the crowd as they’re walking into the stadium,” McLaughlin said. “She’ll play songs that are #1 hits and create that atmosphere of Friday Night Lights, but also warm-up music for the players who are out on the field.”

According to McLaughlin, there are a lot of different elements involved in the football games that all require sound such as student groups that perform, the Black Hole, and the announcer, all of which Daines must juggle and coordinate. Throughout the game, there is always some element of sound involved.

“As the announcer is announcing different things in the pregame before kick-off, she’ll be playing the background music,” McLaughlin said. “From there on, she’s working with band, cheer, and all the other people who try to get the crowd engaged so that she knows when to play music and when to get the Black Hole involved. She coordinates with dance and cheer for halftime, collecting their music, and getting the order. Then at the end of the evening, she’ll play some music as people are exiting the stands.”

As Daines is learning how to manage all the moving pieces during football games, she said she always needs to stay alert and aware of what’s happening on the field.

“Sometimes [the other people in the press box] will say, ‘Hey, it’s a good time to have some music,’ or ‘You have to shut off the music because they’re playing,’” Daines said. “It can be stressful at times, and I was always on my toes.”

During the first game, Daines encountered an issue that forced her to think quickly to find a solution. After two computers that she was planning to use didn’t work, she ended up using her phone to play music instead.

“The first computer, I had done a bunch of prep work on but it didn’t work, and then the second one that we tried didn’t work again, so I had to just keep trying,” Daines said. “I ended up using my phone for the whole thing. I was searching all my playlists for fun songs that everybody would know. It went pretty well despite the circumstances.”

After running the sound board for the theatre company’s musical last spring, Daines said she knew that music plays a large part in how engaged the crowd is. She tried to play songs that would encourage people to cheer on their team and lift their spirits.

“Last year, for our musical, when I’d play the ending music, all the people would always stand up and dance and a lot of the music that I played at the game had the same effect,” Daines said. “Even when the mood got really low because we were losing, I would just try to play an upbeat song and get the crowd happy again.”

For Daines, the most rewarding part of the first game last week was seeing everyone enjoy themselves in the stands. To see that her music is engaging the crowd makes all the hard work worth it.

“My favorite part was listening to everybody sing along to ‘Party in the USA,’” Daines said. “I was not expecting everybody to go along with it. It made me really glad to hear everybody happy.”

As the season continues, Daines looks forward to improving her skills and continuing to play music that keeps the crowd spirited.

“I’m excited to learn what songs do better,” Daines said. “Hopefully, others will give me more tips on what songs to play, and everything will just get more fluid.”

According to McLaughlin, ensuring the football games go smoothly is the work of countless students and staff on campus. He loves watching them pursue their passions, whether that be on the field or behind the scenes.

“We have so many talented individuals on this campus, especially students,” McLaughlin said. “Getting to see how they shine in their element is something that brings joy to my heart. The more students that can use their talents and gifts to share with us, that would be outstanding.”