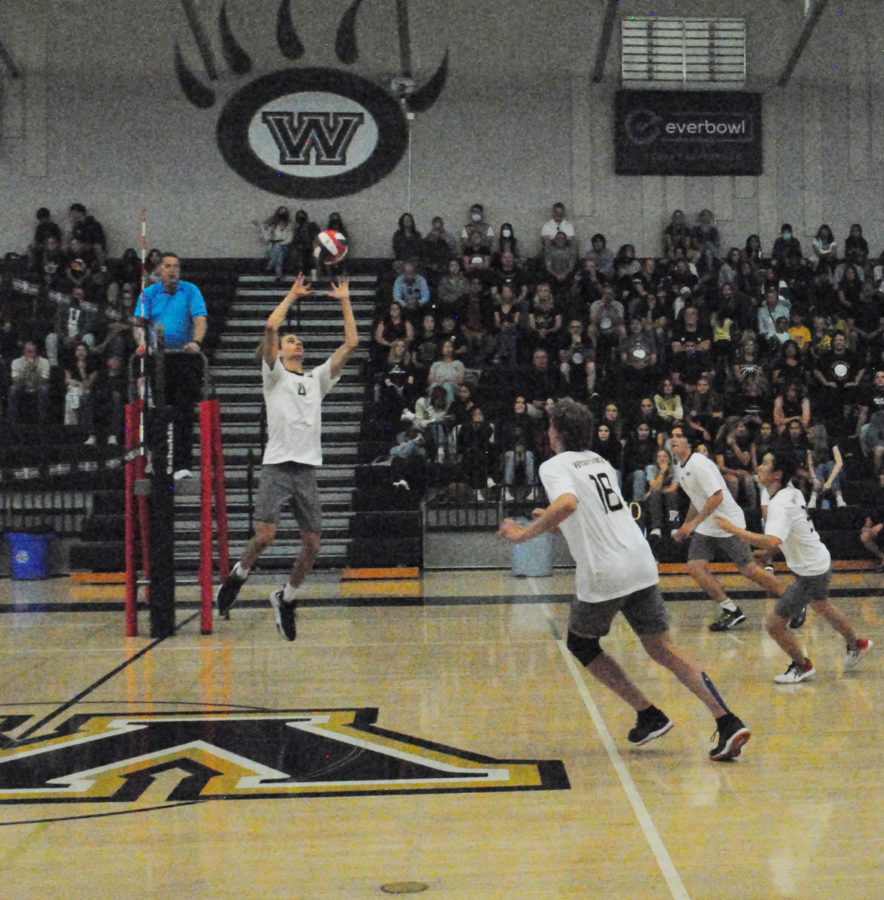 After beating Sage Creek High School 4-1 in the semi-finals, the boys volleyball team faced No. 1-seeded Cathedral Catholic High School in the CIF Open Division finals, May 14.
Setter Luke Forster (12) said that they knew going into the finals that it was going to be more difficult than their previous games, but that the team was up for the challenge and was going to continue playing their best.
However, the day before the finals, a wrench was thrown into the team’s plans. Starting outside Noah Lim (12) injured his hand and wouldn’t be able to play.
“It’s going to be a really tough game,” Forster said. “But, we’re just going to play how we usually play and put our best selves out there because we’ve been playing like that for the past couple games and we’ll try to continue that.”
Without Lim, the team had to adjust, setting the middles and opposites more. Early on, it worked and they won their first set against Cathedral 25-21.
The team continued to push and had many good swings and serves; however, Westview was ultimately defeated in four games, 3-1.
“We just fought as hard as we could,” setter Donovan Weber (10) said. “It’s disappointing that we didn’t win, but I’m proud of the team and their persistence to battle it out to the end.”
Despite the disappointing loss in the finals, the team automatically made it into the State D2 playoffs. So, they brushed off their loss and prepared for the upcoming game against St. Margaret’s Episcopal School where they had a chance to redeem themselves and continue their season.
“We’re not really any less confident going into the next game,” Weber said. “We did pretty well against Cathedral, so we know we can play without [Noah], it’ll just be harder.”
Even with one of their main hitters out, the Wolverines still crushed the first round of States 3-0, May 17. With this win at home they also continued their season streak of being undefeated at ‘The Casa.’
According to Forster, a part of their win streak has been because of the crowd during games, which has a big impact on the energy and performance of the team during games.
“100% the crowd has been an influence over how we play,” Forster said. “[Even at away games] in Sage Creek we had a pretty good crowd,” he said. “It helped a lot with keeping us motivated and having something to play for.”
Riding that high from winning their last game, Westview made their way up to Los Angeles to play Upland High School in the Regional Semifinals, May 19.
The Wolverines knew going into the match that it would be difficult, but they also kept in mind that the team was beatable and that they could play with them.
“They’re honestly a tough team,” Weber said. “We’re just going to have to go out, play our best, and leave our all out there on the court.”
Unfortunately, Westview wasn’t able to pull out another win and ended their season with a 3-0 loss. Despite this, outside Caden Sajnog (12) said that he had a great senior season and was proud of his team and all they had accomplished together.
“This year I had the closest bond with the team,” he said. “I’m very happy with this season because Westview has only had four teams in a CIF Open Division final and we were one of them. They’ve made it very enjoyable to play all four years.”