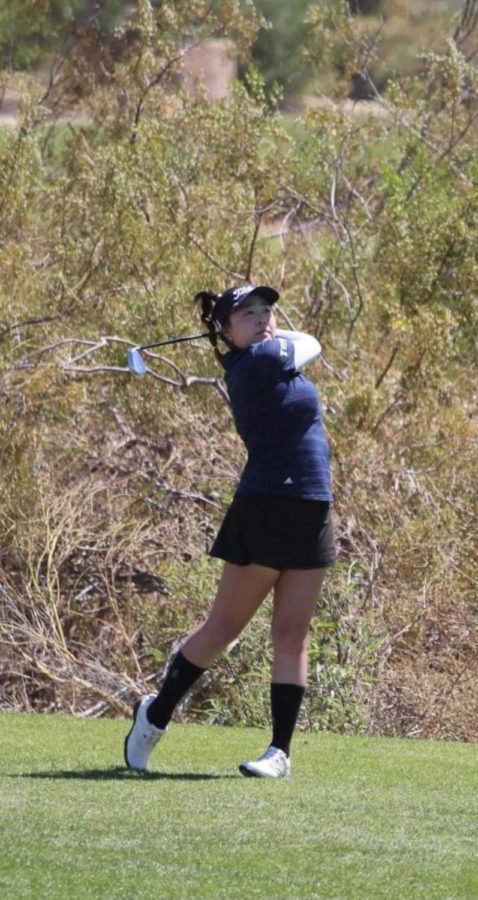 Dianna Lee (12) has been golfing ever since she could walk. From a young age, she was inseparable from the sport and very soon, she will be at the prestigious campus of Northwestern University, where she will play golf.

Ranked as #5 in the state of California in the class of 2022 as well as 28th nationally, Lee has swung her way to the very top.

“My grandparents would take me out to the golf course with them so I could spend time with them,” she said. “This created a strong bond between my grandparents and me [as well] as golf that pushed me to start looking at the sport more seriously.”

Since she was a young child, Lee has been looking for opportunities to continue and improve her golf career.

She began playing competitively when she was 11 and has improved and grown since her early beginnings.

“I think when I started out on the bottom of the [golf] ladder, playing my first tournaments [didn’t go] as well as I wanted,” she said. “I definitely had frustration and greed growing inside of me that pushed me to be better and be the best.”

As opposed to joining her high school’s team, Lee strived for greater heights, joining and playing for the American Junior Golf Association, one of the top leagues for amateur and junior golfers.

“Playing against and with the girls [in AJGA] has taught me to always be a better person before a better player,” Lee said. “When you are always in such a competitive and strong mental field, it’s super easy to crumble under the pressure, so taking care and building up your mental [state] is one of the biggest priorities to not only the game but life [as well].”

Lee has also learned other valuable life lessons that she’ll carry on as she continues to play golf and search for her major.

“It’s important to understand sportsmanship and how it’s not always about you,” she said. “Building friendships with your competitors allows an environment that creates support for one another. Growth will never be linear or exponential and your worth will never be determined by what achievements you’ve made or progress that you’re making. It’s alright to take a break and take a few steps back if you can keep going forward.”

Lee said she’s looking forward to continuing her athletic journey in Illinois and playing for the Wildcats at one of the best colleges for golf and education.

“Playing for the Northwestern women’s golf team is an extraordinary experience and opportunity that I’m super grateful for,” she said. “I’ll be able to pursue higher education with a sport that I hold great importance to.”

Ryan Leonard
Ryan Leonard (12) began his journey towards playing lacrosse at Arizona Christian University when he was in only third grade, when a friend recommended it to him. He went into his first practice with his head held high, even though he knew his skill level wouldn’t be as high as the others who had been playing lacrosse longer.

“It was a huge learning curve,” Leonard said. “There’s a lot to learn, passing, touching, just getting that down. It hurt, but you know, you gotta get used to it, get better at it.”

At a time when lacrosse was feeling like a dead end for Leonard, Coach Brendon, the team’s defensive coach, helped him realize that wasn’t the case.

“One of my favorite coaches is the defensive coach, Coach Brandon,” Leonard said. “He always believed in me, always made me work hard. He’s mostly the reason why I’m still playing lacrosse, and taking it to the next level, because he made me a player, teammate, and person.”

Although Leonard received many offers because of his lacrosse skills, he elected to go to ACU for its quiet campus culture and proximity to his home in San Diego.

“For me it’s important that a school is smaller and has a quiet campus culture,” he said.

Because of Leonard’s proficiency in lacrosse this past December, he played in the Buku Air Station tournament where he had a great showcase of his talent. He led the Wolverines to the 3rd overall place in the tournament, and the collegiate scouts noticed.

“I started the Buku Air Station shootout tournament when they saw me playing,” Leonard said. “That’s kind of where most of the coaches came from. It was mostly from those tournaments that I was scouted from.

Leonard will be attending Arizona State University to major in political science and to continue his long and fruitful lacrosse journey.
Sam Krosch
As Sam Krosch (12) walked into Lake Forest College’s weight room in March, he didn’t know what to expect.

But as he entered the familiar yet foreign environment, he was greeted by the head coach and players, and had the opportunity to chat with the quarterback and running back as they went about their workout. Other players, coaches, and students alike came up to talk to him, welcoming him and introducing him to the school.

Walking out of the weight room, Krosch knew Lake Forest, a small liberal arts college in Chicago, was where he wanted to spend the next four years. Krosch committed to playing safety for the team shortly after.

Krosch has played football since he was 4 years old, and says the sport has led him to finding many of his passions.

“I kept playing because I just like to put on pads and hit people, to be honest,” Krosch said. “It was fun as a 4-year-old to run straight and hit somebody. [And football is] part of the reason I’ve always been a big workout guy. I like to work out to learn more about it, and between that and seeing injuries firsthand, I became very interested in physical therapy, which is what I want to do eventually.”

Football has given Krosch more than a career in his 14 years of playing. Through the game, Krosch has learned skills and lessons he said he hopes he’ll continue to carry with him.

“With football, I’ve learned to keep looking around you for opportunities and be sure to consider everything carefully,” Krosch said. “With football, if you make a mistake, [the other team] is scoring, so I think that’s led me to consider decisions carefully before I do anything. I’ve also had two coaches who mentored me along my football journey. Coach Morrow took me under his wing, taught me the defensive game, and then this year, coach Donnelly checked up on me to give me pointers or help with class and helped me balance school and playing.”

Krosch graduated early from Westview, and was initially unsure about his decision. But now, Krosch is happy that he has the time to complete football workouts with the college team.

“I definitely think [graduating early] was a decision that I look back on a lot, and I don’t know if I would have made it a second time,” Krosch said. “But I think it was a good decision for what I’m doing. I do the college workouts and those take a lot of time, and though it’s harder to see my friends sometimes because they’re still in school, I think it’s overall helped me work on managing a schedule.”

Although he looks forward to the change his new school will bring to his life, he says there will be some things he will miss about San Diego.

“I’m gonna miss the beaches and the year-round sunny weather, but I found a college where I can play and they have my major, so that makes me happy,” he said. “And of course, I’ve made lots of friends through football and I’m going to be leaving them for the most part, but I’ll try to hang with them at a beach when I come back for the summer.”
Cheyenne Roberts
Cheyenne Roberts (12) felt overjoyed when she opened her UCLA admissions letter to find she had been accepted into her dream school. She was finally ready to begin a new chapter of her academic and athletic career.

“When I opened the letter it finally felt real,” Roberts said. “Getting the acceptance letter was a wave of relief because it was finally finalized.”

When looking for schools to apply to, Roberts said both academics and athletics played a big part in her decision, and UCLA is known for both. Roberts will join the track team when she attends school there next year.

Roberts also said that while she’s excited for the college experience in general, she is also looking forward to what the future holds in terms of her athletic career.

Roberts’ athletic goals for college are to improve on her high jumping skills and beat her own personal record of 5’9”. She plans to take advantage of UCLA’s facilities and resources to achieve this.

“I’ll always be working towards jumping higher,” Roberts said. “I think being a part of the team and having access to those facilities will help me get there.”

According to Roberts, being a part of Westview’s track team added to her overall high school experience through the friendships she made along the way.

Though she is unsure about the future, Roberts said that she may want to continue her career in the Olympics.
Riley Stogsdill
Riley Stogsdill (12) gripped his phone. As he talked with the person on the other line, he became more and more hopeful. He was speaking with the soccer coach at Regis College in Boston, MA. As he hung up, he began to celebrate. He had an offer.

Stogsdill has been playing soccer for more than 10 years, and was looking for a college to continue. Though he is unsure of his future career path, he is happy that soccer will be a part of his next four years.

“I’ve always played soccer and it’s a big part of my life,” Stogsdill said. “And with this offer, I just get to keep on playing and doing what I love to do. As I’ve made new friends and grown as a person, I feel like I can trace that all through my soccer career.”

Though both of his parents were coaches who introduced him to the game, Stogsdill has taken the game beyond just a family tradition.

“I really didn’t know what I wanted to do in college, so I said you know what, I’ll play soccer,” Stogsdill said. “I think it’s important to be a leader, and that can mean taking command of your life and what you want to do. And now I’m going to turn a new page and I’d like to pursue soccer all through college and into the pros if I can.”