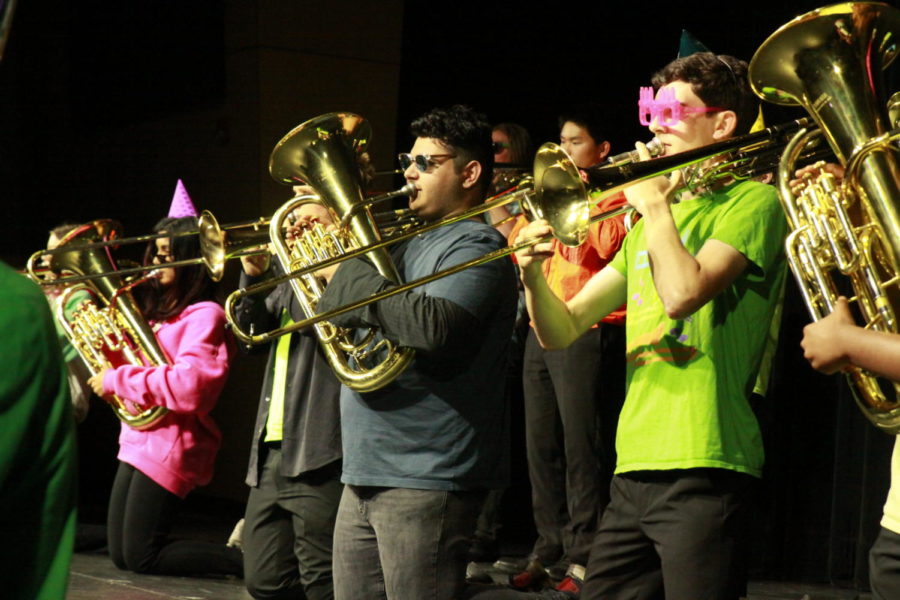 Chris Shimoon (12) and Luc Andreassi (12) wore sunglasses and brightly colored t-shirts as costumes with the low brass section and performed the song “Celebration” by Kool & The Gang, May 26. Students were able to choose this piece and costume to fit the student-managed Westview GOLD show theme of celebration, in honor of Westview’s 20 year anniversary.

It was 11 P.M. on the Friday after the last GOLD show, and Chris Shimoon (12) was experiencing one of the quintessential “lasts” of senior year. It had already been an hour since Shimoon and his friends had first walked into the Denny’s, but instead of digging into the milkshakes and omelets they’d ordered, they were talking and laughing, reminiscing about their time in the band. Some leaned into the table showing each other funny pictures on their phones from previous shows.

For Shimoon, and the rest of the seniors present, it would be the final time they would be able to experience this band tradition.

“I think it’s a relief that we made it through it,” Shimoon said. “We all worked our tails off to get here and it feels so relieving that we’ve put together this crazy intricate show.”

Band president Katie Jacques (12), who sat next to Shimoon, agreed. She said that she is very happy with how everything turned out, especially considering all the challenges of the past year.

“After COVID we had a lot fewer people in the GOLD program,” she said. “But this year people really stepped up and supported us.”

After not having a GOLD show for two years because of the pandemic, the band worked hard to make this show a night to remember.

The GOLD members squeezed time out of their last few weeks of school to practice their music and write quirky transition skits.

Brianna Vargas (12), vice president of band, collaborated with two other emcees to write the script for the show.

“It’s about a 20-hour process total for writing it and memorizing [the scripts], but then we also have to learn our music as well,” Vargas said, a week before the show. “The entire thing is a 30- to 35-hour commitment for emcees, that’s for two weeks.”

According to Jacques, the time commitment for band members helping to create this show is greater because of the role of the students.

“The GOLD show is the most involved show, especially for students, because there’s so much to organize,” she said. “The show is mostly student-led.”

The show also differs in other ways from performances that the band puts on. Beyond the student-led nature of the show, GOLD show allows students to perform pieces in different sections. Each instrument section in the band performs a piece by themselves, showcasing the instrument in a clearer light than traditional performances with all sections.

“The trumpets and horns, low brass, saxophones, flutes, we all get to put together a piece that’s just one instrument,” Shimoon said a week before the show. “It gives us all a really cool opportunity to see how just one instrument can produce such a wide variety of sound.”

Accompanying these different section pieces were humorous costumes worn by the musicians.

These songs and costumes were all chosen by the students. According to Shimoon, because the band members are given more creative freedom, they dress funky and choose well-known music.

Band isn’t the only group that performs in the show.

GOLD performed the show for three nights, allowing the band and Color Guard to iron out any kinks the first two nights before their final show of the year.

“You’re waiting in the darkness and then spotlights come on,” Vargas said. “Then it’s just chaos from there, it’s the first night, you honestly have no idea what’s going to happen. We’ve had a few rehearsals leading up to it, but they’re not super in-depth. You just have to kind of work together and make the show as great as you can.”

But by the end of last night, GOLD members said they were happy with their performances.

“Everyone’s tired, but so proud,” Shimoon said. “Because we made the whole show work, there’s an overall sense of pride like, ‘Yes, we did it.’”

Twenty-five seniors are leaving the band after they graduate with this being their final show in high school. As the curtain closed on their senior year they realized it was the end.

Surrounded by friends at Denny’s the production team seniors looked back on the last four years in the band.

“It’s bittersweet,” Shimoon said. “Because there’s so much work going into it, I’m going to miss it so much. It’s just such an amazing experience. It’s definitely one of my highlights of being at Westview.”