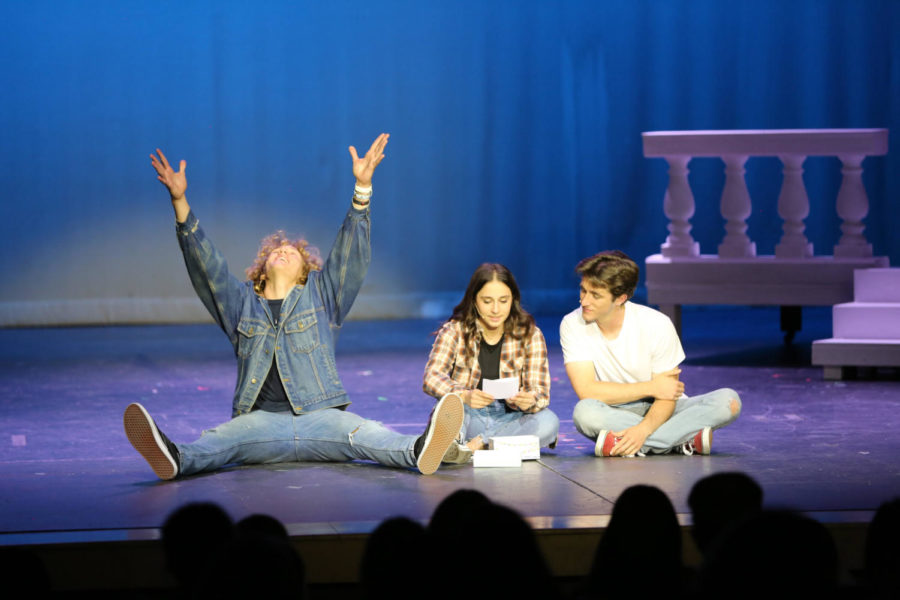 Left to right: Jonathan McPherson (11), Shai Davis (11), and Tyler Shaw (12) perform in theater-hosted One Acts, May 12. They sit on the stage as their characters reflect on past experiences and the future.

After spending most of the year brainstorming, Cassandra Nguyen (12) finally found an idea that would inspire her next play: the PACER fitness test. She realized she could relate the concept of the test back to her own life and her end-of-high-school experiences.
“It serves as a metaphor throughout the One Act in the sense that you’re racing to beat time,” Nguyen said. “I started applying my personal knowledge to that and the plot fleshed out from there.”
After being a part of One Acts—a series of short, student-led plays that are performed every year—for her entire high school journey, Nguyen had the opportunity to write her own play for the theater production.
Nguyen’s play, “The Three of Them,” follows a junior in high school who finds herself racing to beat time before her two best friends leave for college.
According to Nguyen, writing her own play allowed her a chance to give back to the group she had been a part of throughout high school.
“One Acts holds a special place in my heart because it was the first time I felt I could potentially stay [in theater] for all four years,” Nguyen said.
Despite expecting to feel more nervous about relinquishing control over her script to directors Emily Butman (12) and Sienna Barker (11), Nguyen trusted them and their theater experience.
“I knew that no matter what they did, [the story] was safe in their hands,” Nguyen said.
Butman said she and Barker read through the script separately before coming together to plan how they would direct the play. The beginning of the process was altering the script and laying out blocking for the actors.
According to Butman, the friendships portrayed in the play are similar to her own friendship with Barker—as a senior, Butman will be leaving for college soon. The connection that they had with the script gave them a clear vision for the play.
“It definitely hit close to home,” Butman said. “It’s definitely relevant when you have [a lot of] senior friends because you’re all going your different ways and you’ve had so much of your life with these people.”
One way the directors planned to portray this experience, they said, was through their choice of actors to play the three main characters. Going into auditions, they were looking for actors who could portray their character authentically and who had good chemistry with the other actors.
“It’s trying to stay true to the energy of the characters, but also how those characters interact with each other,” Butman said. “Our entire callback schedule was all based off of their chemistry, because they can be good actors, but for this script they needed to have that authentic connection.”
On top of embodying their characters, Butman said many of the actors added their own elements to the story. Oftentimes, jokes made by the actors during rehearsals would later be incorporated into the script.
“[During] the first read-through, they played around with it a little bit and brought their own stuff,” Butman said. “We ended up keeping a lot of stuff that was used to joke around and have fun.”
When it came time for opening night, the directors said they were nervous, but they trusted the actors to execute their visions. According to Barker, it was comparable to teaching someone how to ride a bike.
“It’s like ‘okay, don’t crash, don’t get hit by cars, don’t fall, but you have enough faith in them and you’ve watched them do it so many times,” Barker said.
Shai Davis (11), who plays the lead, Mabel, said the experience was very enjoyable and rewarding. According to her, she based her acting off personal experiences with close senior friends. Much like Mabel, she isn’t ready for her friends to leave either, and that mindset helped her embody the character.
Davis said working with other actors and the directors made it a very collaborative project.
“We played really well off each other,” Davis said. “If you watched it every night, it was just a little bit different every time because sometimes we did a joke differently or said a line differently.”
According to Davis, it was her first production as a lead. She said there were many lines to memorize, but she felt less nervous when it came time to perform.
“The nerves kind of just went away the moment I got on stage,” Davis said. “It was so much fun, and opening night, being able to get everyone together, we were all so excited to get on stage.”
Barker said her main takeaway from her experience directing was working with people on an emotional level. Her goal was to take that emotion and bring the character to life on stage.
“I always say acting is my favorite art form because it’s just raw emotions,” Barker said. “It was rewarding to direct that emotion into something that we could create [into] an art form.”