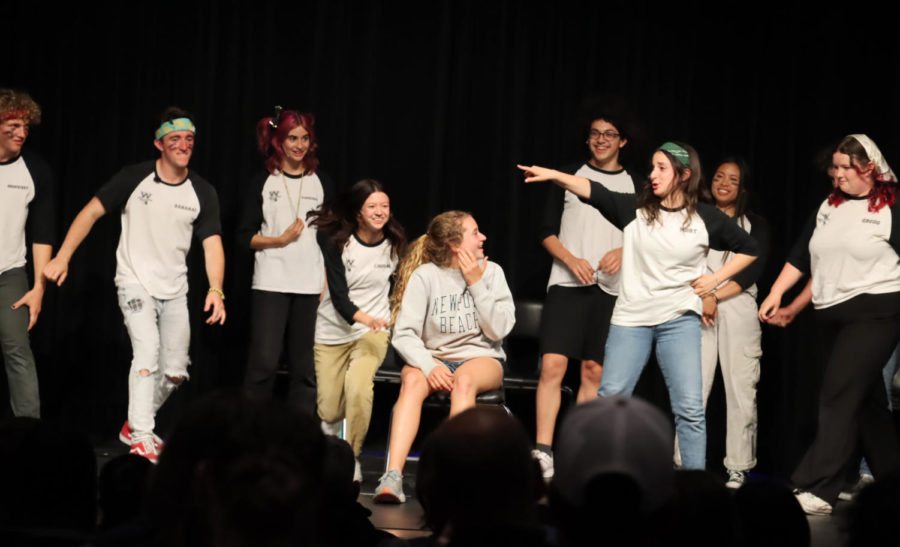 The improv team broke up into two groups, humans and zombies, to further the zombie apocalypse theme. They competed against each other, playing a variety of improv games. This show also allowed alternates to perform for the first time.

The games, such as Emo Party and Pan Left Pan Right, were built around words such as settings and themes that the audience suggested, ensuring the spontaneity of the performance.

For example, in the game Typewriter, two performers would narrate a story based off of a story title suggested by the audience. The remaining performers on the team would then act out that story, becoming the characters and pursuing the actions that were created by the ones writing. These types of games highlighted the creativity and quick thinking that the team had developed.

The show also featured all-play games, such as Town Hall, Categories, and Soup, where the two groups competed together.

In the game Town Hall, the audience would suggest a debate topic, such as “Is the Kool-Aid man the drink itself or just the glass?” The performers would then disperse around the theater, sitting in the audience or on top of ledges. One by one they would defend their side of the debate, becoming different characters and acquiring different quirks, whatever they felt would persuade the crowd. At the end, the audience would vote for which team they felt was most persuasive.

Co-Captain Tyler Shaw (12) has been on the improv team since his freshman year, after joining  because he was intrigued by the upbeat atmosphere of the team.

Even though the team divides and competes against each other, the team is constantly working together to produce an entertaining show.

“We do split up for shows,” Shaw said.  “But at the end of the day, the whole team’s goal is the same, and that is to make the audience laugh and have fun.”

After each round, the audience would cheer for whichever side they thought was funnier. The winner of each round was then determined by “Mr. Voice,” a faceless character who explained each game and narrated the show.

Mr. Voice is a long-standing tradition of Westview improv shows. It allows a fun and unbiased opinion to host the show and decide the winner of each round based on audience reaction. Mr. Voice also narrates the show and explains each game.

“It’s also a fun way to get our improv alumni involved, as we bring back a different alumni for each show,” Montesi said.

Morgan Montesi (12) has been the off-stage co-producer of the improv team for the past two years. During her freshman year, Montesi attended improv workshops, but decided she enjoyed watching more than participating in it.

“Being the off-team producer has been such a great way to get involved with the group while still being able to enjoy the shows from the audience,” Montesi said. “It has been such a rewarding experience that has really allowed me to get to know so many amazing people.”

Montesi and on-stage co-producer Megan Greer (12), create the theme for each show. Together, they then promote the show, creating posters to hang up around school and planning spirit weeks for the improv team.

Unlike other Westview Theatre productions, improv shows are completely unscripted. At times, it can be difficult to come up with ways to keep the scene moving and to be in tune with your teammates.

“It can be scary at first,” Shaw said. “One thing we teach the team is that there are absolutely no wrong answers in improv. If you can’t think of anything clever or funny, we establish something in the scene that can help set up a teammate to land a punch line instead.”

The team practices once a week, and also gets workshops from their coach, Adam Rudder. There, they learn strategies and strengthen habits to use in future games or shows. Rudder teaches them to establish their location, their relationship, and what they are doing within the first three lines of the scene. Although there is no way of telling what will happen in a scene, learning those fundamentals can help the team prepare.

“Adam provides us with a lot of valuable knowledge,” Shaw said. “He’s been doing improv and professional work for a while and is able to see things in a scene that we don’t see otherwise.”

Using the fundamentals that they learn, the improv team was able to work together as a team to make the audience laugh.