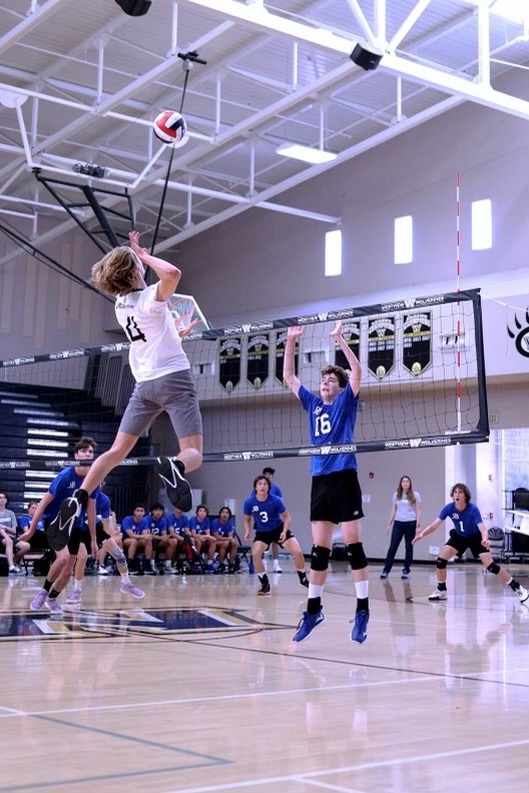 Courtesy of the Forsters

Luke Forster (12) spikes the ball at the senior night game against Del Norte, April 19. He has played volleyball since freshman year. Photo courtesy of the Forsters.

Bill​​ and Tricia Forester posed with their son Luke Forester (12), a member of the boys varsity volleyball team, in front of his poster on the gym wall. For senior night, Tricia held a bouquet of flowers while a wreath of sour patch kids and M&M’s adorned his son’s neck, April 19.

“The people who coordinated it made it really special for the players and the parents,” Bill said. “It was really nice walking up with him and just getting to hear all the nice things [the coaches] had to say about him.”

Luke started playing volleyball for Westview during his freshman year but has always been an athletic kid, starting soccer with his older sister Jessica Forester (2020) at age 2.

“I remember taking [the kids] to the North County Soccer Park when Jessica was 5, and Luke was 2,” Bill said. “She was the classic kid that partially played goalie [and] would look at me on the sidelines and wave. Whereas [Luke] was out there running like [a] maniac, trying to get the ball. He was relentless. He always had this amazing drive for sports.”

Luke soon picked up basketball as well, which became his main sport throughout elementary and middle school. Once high school came around, he was good enough to make the JV team.

During his spring offseason, Luke first tried out volleyball.

“It’s funny because I played beach volleyball myself for about 35 years,” Bill said. “[Luke] would hit the ball with me a bit but he was pretty small as a freshman.”

Luke continued to play volleyball, making JV as a sophomore and varsity as a junior. He made it his primary focus, quitting basketball to pursue volleyball when their seasons aligned last year. Soon, he became one of the key members of the team dynamic.

“It’s what he wanted to concentrate on and it was a pretty easy shift,” Bill said. “[He] just submerges himself into whatever he’s doing.”

Ever since Luke started volleybal his dad made sure to come to every game to support him.

“I always come to the games,” Bill said. “The boys are just so together and it’s just so fun to see them support one another and do well as a  team.”

For Bill, the senior night symbolized the end of an era. Only a few more games and Luke’s final season was over, then he’s off to college at UCSB. His sister was already out of the house, so for Bill and Tricia this was their child to leave the nest.

“It’s insane how fast it’s all gone, but I’m sure everybody says that,” Bill said. “I guess it’s just [the] whole leaving the nest thing. [I’ll miss] just having him around to play sometimes. It’s funny because in your mind, your kid is still just a kid.”