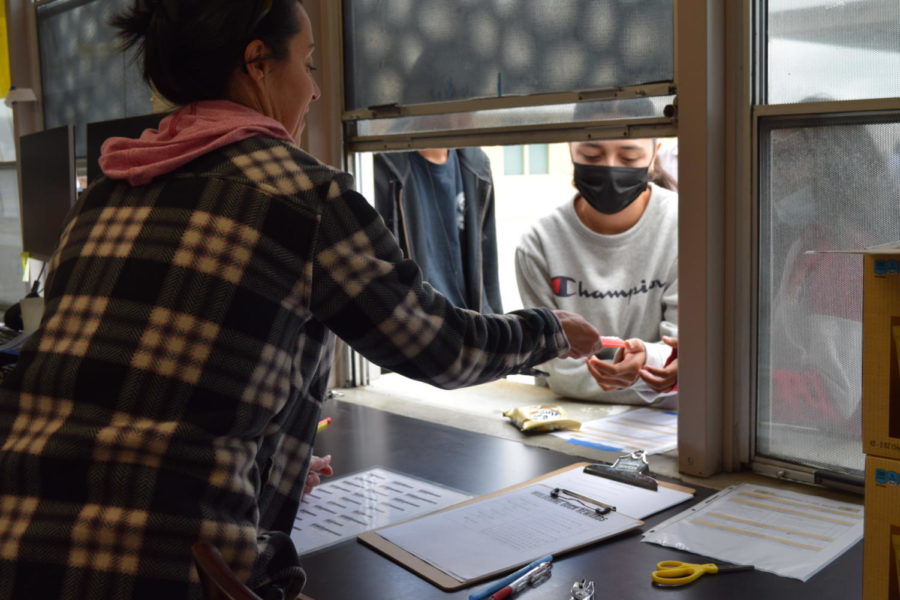 Area Administrator Teri Heard rewards students cashing in their Wolverine Bucks, April 25. Heard is in charge of the Wolverine Bucks program on campus.

Students have earned Wolverine Bucks for doing everything from picking up trash to taking a mini fridge from a teacher. Some students, like Marc Artaud (12), have wholesome stories to tell about how they earned a Buck.

“One of my favorite moments this year was getting a Wolverine Buck from Ms. Rose,” said Artaud. “I was in the library, and I jokingly asked her how to get a Wolverine Buck. She asked me the name of the flower that sits at the front, and I said that it was her. Best Wolverine Bucks interaction ever.”

Area Administrator Teri Heard conducted student surveys in select classes on campus early in the year in order to gauge student opinion on a school currency. After enough students were interested, they had the opportunity to pick the design, prizes, and how to earn the currency.

Heard created the program as a part of Westview’s Positive Behavior Intervention System (PBIS), which is a positive reinforcement plan meant to encourage positive conduct on campus.

“We wanted to create a program that helps kids feel more connected with their peers and with Westview, and one that encourages upholding Westview standards,” Heard said. “We’ve only had one store so far, but I’m already very happy with how it’s going. There was a line for the entirety of lunch, and it was good to see students collaborating and pooling their Wolverine Bucks.”

Heard is working to hear feedback from students in the future, and said she is hopeful for the future of the currency.

“We want to make the Wolverine Bucks appealing to students and we want to give [them] rewards that they will actually enjoy,” Heard said. “I think that most students will like the rewards and want to see [the program] succeed and continue into the future. We want to continue it next year, and we already have teachers to add into our group leading the program. We even have plans to go through some training to learn how to use the program most effectively.”

Teachers are free to distribute Wolverine Bucks at their discretion, but the system is meant to reward helpful and exemplary students.

“I was surprised how many Wolverine Bucks we got to begin with, but I still burned through them all in two days,” science teacher Mike Kurth said. “I try to use them as a tool to encourage student interaction. I teach in a way that lets me observe the whole classroom, and watching students interact and help each other and teach each other new things was how I determined who got one. I saw it a lot in those first two days, and I ran out pretty quick.”

Students have had mixed responses to the Wolverine Buck. Some think it is a fresh new idea, and others say that the new currency isn’t such a good concept.

“It doesn’t make sense because it just doesn’t accomplish its goal in my opinion,” Marko Lipovic (12) said. “People do stuff in front of teachers to get [a Wolverine Buck]. For example, one of my friends told me that they staged a scenario in front of a teacher and earned a Wolverine Buck as a result. It’s just not a good system.”

Heard addressed the possibility of negative behavior, but said she is confident in the student body to do the right thing.

“Of course there is a chance that students may do the wrong thing and try to take advantage of the Wolverine Buck,” Heard said. “But I don’t think many students will even think about that, and I also think that students at Westview are good at heart and will want to see this succeed.”

But despite some negative opinions, students are happy to have a new campus currency, and some are very proud to have earned a Wolverine Buck.

“I have 13 Wolverine Bucks, and I’m just saving them until next year because I want to see if there’s any cool prizes,” Jake Ferrell (11) said. “I really like when I earn a Wolverine Buck because it makes me feel like I’m helping my classmates and my teachers. I think the Wolverine Buck is really healthy for campus, and I definitely think it’s cleaner and people are more responsible.”