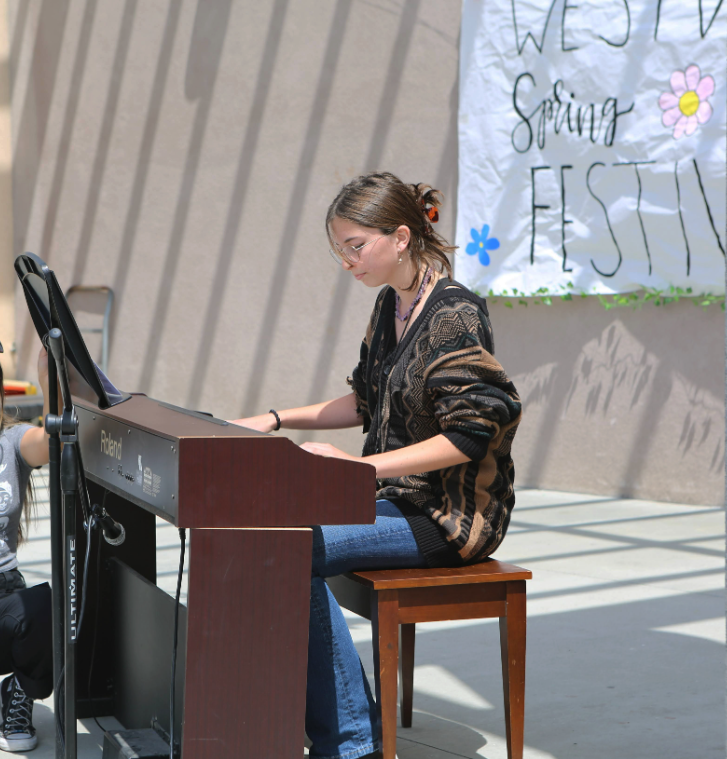 Julia Smith (9) plays the piano during auditions for the festival, April 25. Smith chose to perform the song “Merry-go-round of life.”

Before his performance, Vincent Chen (11) walked onto the stage confidently, guitar in hand, ready to perform in front of a crowd of onlooking students. Though he had never performed for an audience before, Chen knew that he should just enjoy this high school experience.

“I realized that I’m just trying to have fun in high school and there’s nothing to worry about,” Chen said.

In celebration of the spring season, ASB hosted the Spring Music Festival in the amphitheater, April 27-29.

According to ASB commissioner Kaya Nepomuceno (10), they knew they needed to focus on the logistics.

“We started from nothing and we planned up to what we wanted,” Nepomuceno said. “We had our ideal spring music festival in mind and we worked on all of the little details from there.”

On the second day of the festival, Chen  performed the song “Nothing” by Bruno Major at the spring music festival. He enjoys listening to the British singer-songwriter and guitarist so he decided to perform a popular song of his.

“’Nothing’ is one of his more well-known songs,” Chen said. “I chose the song because I enjoyed the sentimental meaning and it was a song that I could play and sing.”

Chen didn’t come from a very musical background but once he started, he enjoyed it, so he kept with it to try to improve. He never took any guitar lessons and is completely self-taught.

“I performed the song [for the first time] with a friend at a birthday party when I couldn’t sing so it wasn’t very good,” Chen said. “But from there, I picked up guitar and then I just worked on singing.”

For the audition, Chen’s nerves got the better of him and he forgot the lyrics to the song. Luckily ASB gave him a second chance and he was one of the select few chosen to perform.

“I wasn’t scared but I did forget the lyrics,” Chen said. “That was the only time I was really nervous. It was the first audition I had and was the first crowd that I have ever performed in front of.”

At the actual performance, Chen still encountered some difficulties. When he first tried to sing, the sound system started to falter and the microphone wasn’t picking up his voice or guitar. Despite these few challenges, Chen is pleased with his performance.

Julia Smith (9) played the song “Merry Go Round of Life” during the music festival. Similar to Chen, her passion for performing started when she was young but this was the first time she had performed at a concert of this caliber.

When Smith was younger, she performed in small recitals with her music teacher, but this did not prepare her for the nerves she faced heading into the Spring Music Festival.

“My music teacher would have a festival but it wasn’t as daunting as playing in front of the giant crowd,” Smith said.

Smith would describe the feeling of performing not as nerve wracking, but rather as exhilarating

“I wasn’t as nervous as I thought I was going to be,” Smith said. “It was more of a feeling of excitement and the fear of trying to impress people. I thought nobody was gonna be there, but I was surprised when there were almost 300 people. That’s when the panic set in.”

According to Julia Oshiro (10), ASB commissioner alongside Nepomuceno, the festival provides a much needed break for students during a time of high academic pressure.

“It originally started as a way to give students a break before AP testing, which is really important to have a nice lunch activity where you can be in a stress-free environment, listen to nice music, and talk to people,” Oshiro said. “It’s a fun activity for students to watch and enjoy, instead of stressing about all the AP tests that are coming next week.”

To Oshiro, it’s important to display the many talents of Westview students.

“I think it’s a really cool event that we put on, which showcases a lot of the talented performers we have on campus,” Oshiro said. “It’s great that we have students on campus who are really good at music.”