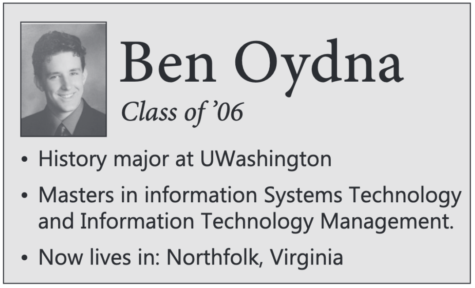 Ben Oydna has spent almost a decade as a Marine. Having known since junior year of high school that he was interested in joining the military, his life experiences are deeply intertwined with his service. His job has taken him across the world, and to different altitudes — he’s made friends in Iraq, been stationed in the seas of south Asia, and gone parachuting. Today, he looks forward to the opportunities that his job brings him, as well as the abundance of experiences that it offers. He is confident in the pathway of his life, he says.

But this wasn’t always the case. Fresh out of high school as an 18-year-old, away from home for the first time and pursuing a B.A. in history at the University of Washington, Oydna had less of an identity and more of an idea of who he believed he was supposed to be.

This was, in part, because of the competitive academic pressure of Westview. His indecision also stemmed from youthful immaturity—being in an entirely new environment made him feel like a fish out of water, exposed to all sorts of new ideas.

“Going through high school, college was always the end goal,” Oydna said. “But then you get into college, and you realize that you haven’t arrived anywhere, so what are you going to do now?”

For Oydna, college was a valuable experience because it led him to experiences he had never before expected to have.

“Going to school was more of a means to an end—school wasn’t the end goal,” Oydna said. “The real value [of college], in my opinion, is exposure to new ideas and people.”

However, in a constant pursuit for new adventures, he said he believes the hands-on experiences that he’s had as an officer in the military on his two deployments are far more important in the molding of who he is.

“It wasn’t either undergrad or grad school that formed me into who I am today,” Oydna said. “I think we have this narrative [that] whatever school you go to molds you into the person you are, and I would disagree with that sentiment. Whatever direction your life takes, and whatever experiences you have in the ‘real world’ are what shape who you are.”

Specifically, his encounters with others from all parts of the globe. His best memories from the military are from the time he spent in Iraq as a Foreign Security Force advisor, working to train the people on the ground who were working on clearing ISIS out of Iraq.

“I’d say more than any other experience that I had in my military career, that experience was the most formative,” Oydna said. “I look back on that period of time with the most fondness — I worked with some really, really incredible people.”

Similarly, another experience that he has a deep impression of is of the three weeks he spent at parachute school, where he learned how to jump out of planes.

“It’s one of those things where the first time is terrifying,” Oydna said. “You have to learn to turn your brain off and rely on the training that you’ve been given. If you do those things, you’ll be fine.”

Throughout his career, Oydna has tried to stay true to his reason for joining the military as an officer in the first place, one which is rather unconventional.

“I pursued things that interested me, and sounded like experiences I wanted to have,” Oydna said. “I didn’t join the military as an officer because of ambition—I don’t have any aspirations of becoming a general one day. I joined the military for the experience, and to feel like I was doing something important.”

For the most part, he has been able to stick to his resolution. While at times, he has considered leaving the military because it was not giving him the experience he wanted, new doors have opened, ones that give him the chances for meaningful interaction. Each new and interesting opportunity threads onto the journey that he has already spent so long on, one that has taken him everywhere from Malaysia to Japan.

As a product of his career, Oydna has developed a philosophy that puts the journey ahead of the destination. Sixteen years after he graduated from Westview and following extensive military experience, he has solidified his understanding of himself and what he values.